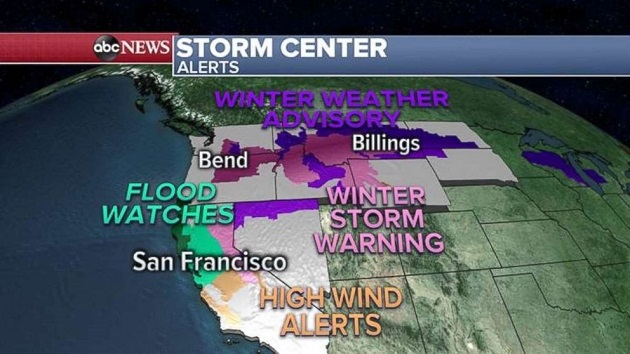 ABC News(NEW YORK) — An atmospheric river is targeting the West Coast, which will see more heavy precipitation following a snowfall Monday in Oregon of 2 to 3 feet.
The heavy rain and snow forecast for Tuesday could lead to flash flooding and mudslides, as warnings and alerts have been issued Tuesday morning throughout much of the West.
A system building off the West Coast Tuesday morning already is heading toward the coastline.
The system is likely to hit between southern Oregon and central California later Tuesday afternoon and into the evening. Heavy rain is expected at lower elevations, with flash flooding and mudslides remaining the biggest threats there.
The heaviest rain in that region should finish up by Wednesday afternoon, but lighter rain should continue for the majority of California, including the southern part of the state.
Additional rainfall through the rest of the week could be about half a foot, with some spots seeing as much as 10 inches.
At higher elevations, several more feet of snow is possible, with the Sierra Nevada potentially receiving 5 more feet.