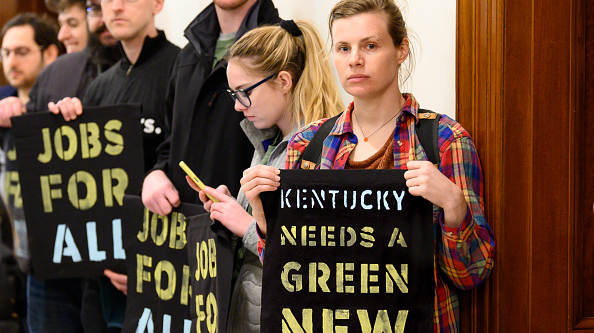 Michael Brochstein/SOPA Images/LightRocket via Getty Images(WASHINGTON) — Young environmental activists swarmed the office of Senate Majority Leader Mitch McConnell on Monday to urge him to take action on climate change and support a Green New Deal, some of them sharing stories of environmental fallout from McConnell's home state of Kentucky.
Lily Gardner, a 15-year-old from Eastern Kentucky, told reporters: "I am here urging him to consider the young Kentuckians who have traveled all the way to ask him: 'Why, why are our voices not being listened to?'"
"I am scared. We are all scared," Gardner said.
"The Green New Deal is our best and only solution right now," Varshini Prakash, executive director of the Sunrise Movement, told reporters outside McConnell’s office Monday. The Sunrise Movement is an activist group that encourages young people to fight against climate change.
McConnell wasn't at his office for the protest and a spokesperson couldn't be reached for comment.
The Green New Deal is a nonbinding resolution that aims to shift the U.S. economy from non-renewable to renewable energy sources, and virtually eliminate the country’s greenhouse gas emissions by 2030. Republicans, like McConnell, have called the idea unrealistic and potentially damaging to the U.S. economy, and while the Republican leader announced earlier this month that the Senate would vote on the resolution, it was clear his goal was to force several Democratic presidential candidates in the Senate to go on the record on a controversial issue.
U.S. Capitol Police arrested 42 people at Monday’s event, according to a spokesperson.
The incident comes days after California Democrat Sen. Dianne Feinstein's encounter with the Sunrise Movement. On Friday, a group of San Francisco Bay Area students urged Feinstein to support the Green New Deal.
"That resolution will not pass the Senate," Feinstein told the students. "Because it doesn’t have a single Republican vote."
"I've been doing this for 30 years. I know what I'm doing," Feinstein said.
Feinstein circulated copies of her own draft proposal to address climate change.
A tweet posted Friday by the Sunrise Movement says Feinstein reacted to the children with "smugness" and "disrespect," and video of the encounter went viral on Twitter.
In a press release Friday, Feinstein said: "Unfortunately, it was a brief meeting but I want the children to know they were heard loud and clear."