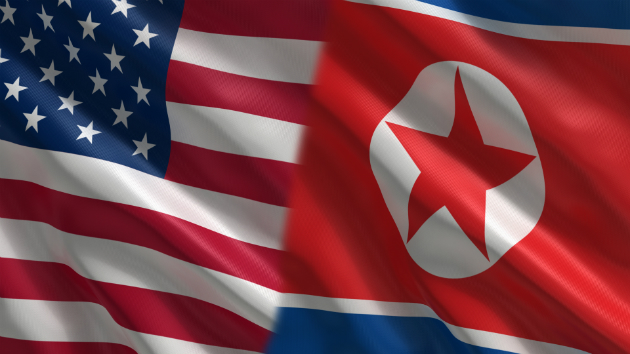 ANNECORDON/iStock(WASHINGTON) — At the conclusion of his first summit with Kim Jong Un, President Donald Trump said "we'll be doing something" on human rights as the United States moves forward in negotiations with North Korea.
In an exchange with ABC News' Jonathan Karl about whether the president still believed Kim needed to reform, Trump said, "It's a rough situation over there, there's no question about it."
"We did discuss it today pretty strongly. I mean, knowing what the main purpose of what we were doing is: de-nuking. But discussed it at pretty good length. We'll be doing something on it," the president continued.
Karl, referring to the president's vision of an economically vibrant North Korea in exchange for denuclearization, asked, "But do you think that needs to change to bring on this glorious new era you've talked about?"
The president replied, "I think it will change. Yeah. I think it probably has to, but I think it will."
Eight months later, no evident progress has been made on the issue.
Asked before Congress last month whether the U.S. had any intelligence to suggest that North Korea has made any effort to improve its human rights records in recent years, CIA Director Gina Haspel said she couldn't point to "any specific changes" in North Korea's behavior.
While the issue of human rights is not expected to be a focus of the second summit with Kim — who is regarded as having one of the world's worst records on human rights — the president has continued to trumpet a vision of North Korea's potential to become an economic powerhouse.
"North Korea will become a different kind of Rocket – an Economic one!" Trump wrote on Twitter earlier this month.
But if the president is serious about North Korea's economic development, North Korea expert and Georgetown professor Victor Cha said North Korea's human rights abuses must also be addressed for reasons beyond the morality.
"The reality is that there is no international financial institution or no U.S. or western company that will go into North Korea if there are human rights violations somewhere along the supply chain because then they would be in violation of U.S. law," Cha, who serves as a senior adviser at the Center for Strategic and International Studies, said during a recent briefing for reporters. "So it actually really matters for the negotiations."
Despite the realpolitik importance of the issue, Cha predicts the issue will garner little attention.
"It's not just a throwaway to talk about human rights," Cha said, "but I'm not confident that that's going to be one of the headlines coming out of this meeting."
Copyright © 2019, ABC Radio. All rights reserved.