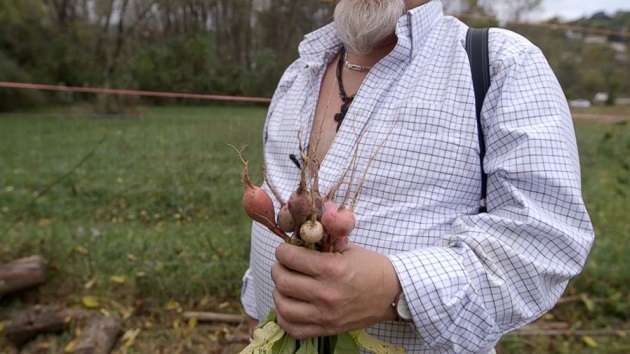 Janet Weinstein/ABC News(MORGANTOWN, W.Va.) — The damp air in Morgantown, West Virginia, makes it feel like it’s about to rain, but the that doesn’t stop Mark Cafego from heading out to one of his favorite places in town.

Once he and his sponsor arrive at the community garden, they go to work, picking harvested vegetables from the soil.

His life didn’t look like this a year ago.

“My life was bad. I mean really, really bad,” Cafego told ABC News. “I was strung out on meth. OD’ed on heroin. It was a disaster.”

Cafego is in recovery, and said he found sobriety at Friendship House — a day center for people struggling with substance abuse addiction.

West Virginia saw some of the highest rates of death due to drug overdose in 2017 in the U.S., according to the Centers for Disease Control and Prevention.

Friendship House bases its programs on a peer support model. Activities include art and music therapy classes, a drop-in center with puzzles and games and working in the community garden.

“It was unbelievable how much [Cafego] took ownership of the garden,” said Laura Jones, the executive director of Friendship House. “We won nine awards at the local county fair with the vegetables he put all that love and care into.”

Cafego admits he still struggles every day with his addiction, but life is brighter now with the garden.

“It gives me peace of mind… at the end of the year, you can see what you accomplished,” he said. “It just keeps giving man, and it's really wonderful.”