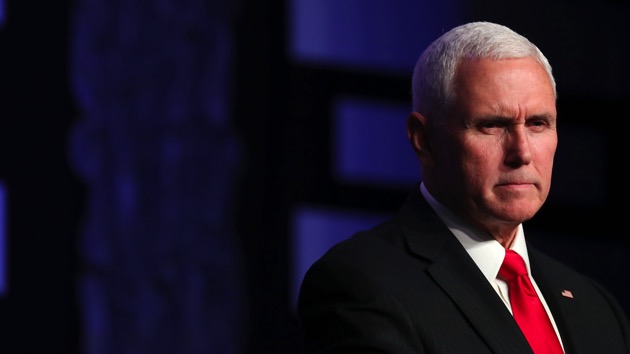 Joe Raedle/Getty Images(WASHINGTON) — After rising tensions in Venezuela turned violent over the weekend, Vice President Mike Pence doubled down on diplomatic and economic pressure on Monday with additional U.S. sanctions on regime officials and a pledge to provide $56 million in aid to support partners in the region struggling to provide relief to the country's citizens.
Pence met with the U.S.-backed opposition leader in Venezuela Juan Guaidó on Monday, the latest in the Trump administration's show of support for the man it says is the country's legitimate leader, as it presses its effort to oust President Nicolas Maduro.
The Pence-Guaidó meeting in Bogota came after deadly clashes this past weekend between protesters and Venezuelan forces backing Maduro. The sides clashed over attempts to deliver humanitarian aid from Colombia into Venezuela.
"The tragic events of this past weekend has only steeled the resolve" of the United States to stand with Venezuela, Pence said. Pence made remarks before the press in a bilateral meeting with Guaidó and Colombian President Ivan Duque.
"We are with you 100 percent," Pence said to Guaidó, reassuring the U.S.-backed leader the White House intended to continue its support until, Pence said, full "libertad," or liberty, was restored to Venezuela.
Later, Pence pledged to give over $50 million in remarks before the Lima Group, a 14-country group of largely Latin American countries that rose out of violence in Venezuela and is intended to navigate the crisis in the country.
The vice president also announced additional sanctions, effective Monday, on regime officials and three border state governors who the Trump administration believes assisted in blocking humanitarian aid. Earlier this month, the U.S. Treasury announced sanctions on five top Venezuelan officials.
He intensified pressure on the Lima Group specifically, asking not just for support but for the nations to freeze assets to Venezuela's oil and natural gas company, PDVSA, restrict visas and increase financial pressure on Maduro's "inner circle," and to vote to recognize Guaidó's representative at the Inter-American Development Bank.
In the last two weeks, the U.S. military sent around 400 tons of food and medicine to Colombia and Brazil, destined for Venezuela, Pence said, and is currently identifying new areas along the border where the United States can preposition additional aid to reach people inside the country. Maduro, who has urged the U.S. to keep its hands out of Venezuelan affairs, denies U.S. aid, calling it a precursor to an American invasion.
Pence spoke directly to the military members backing Maduro on Monday.
"These men worked to block aid for people in need and suppress peaceful protests – and their actions will not go unpunished," the vice president said. He urged members of the Venezuelan armed forces to "make the right choice" and accept Guaidó's "sincere offer of amnesty."
To those who would not withdraw support for Maduro, Pence said he had a message from President Donald Trump: "You will find no safe harbor, no easy exit, no way out. You will lose everything."
Pence reaffirmed the president and Secretary of State Mike Pompeo's promise that "every option," including military interference in the country, is still on the table.
The vice president's rhetoric on Venezuela has steadily increased since initial calls for support Guaidó, holding round table discussions with Venezuela exiles earlier this month and calling on European leaders to recognize Guaidó at the Munich Security Conference in Germany.
Pence also showed support for protesters in Venezuela preparing to head to the streets again soon.
"To the freedom-loving people of Venezuela, know that you do not go alone," Pence said.
Neighboring countries like Brazil and Colombia have joined a host of nations in recognizing Guaidó's leadership. Some countries, like Mexico, have stayed neutral, while others, like China and Russia, have denounced foreign intervention in Venezuela's government.
Pence called on more countries to support Guaidó in his remarks on Monday.
"And to leaders around the world, it’s time: There can be no bystanders in Venezuela’s struggle for freedom. The United States calls on every nation to recognize Juan Guaidó as Venezuela’s President, and step forward to support the Venezuelan people’s struggle to reclaim their freedom and rebuild their democracy," the vice president said while addressing the Lima group in Bogota, Colombia.
Pence was also scheduled to meet Monday with families who fled Venezuela.
Copyright © 2019, ABC Radio. All rights reserved.