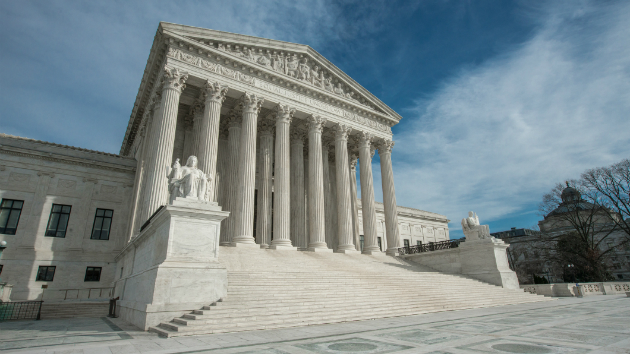 dkfielding/iStock(WASHINGTON) — A 40-foot, 16-ton Latin cross on public land in Bladensburg, Maryland, is the next major legal test for the Constitutional separation of church and state.
The Supreme Court will consider this week whether the memorial, erected in 1925 to honor 49 Americans who fought in World War I, improperly promotes Christianity at government expense.
What the nine justices decide could have a sweeping impact on communities nationwide, where historic war memorials and government buildings bearing religious imagery are commonplace.
"Is this 'establishment of religion' through entanglement? That is the operative question," said JP Schnapper-Casteras, a constitutional lawyer and former Supreme Court advocate for the Legal Defense Fund.
The Establishment Clause of the First Amendment says that "Congress shall make no law respecting an establishment of religion," but the exact meaning and intent of the phrase are still widely debated.
The Maryland cross memorial, designed by the mothers of the 49 fallen soldiers, was first erected on private property using private funds. But in 1961, the Maryland Park Commission took possession of the land and memorial and have since used state money to maintain them.
In 2014, three local residents, represented by the American Humanist Association, filed suit in federal court seeking to have the monument removed from public property or modified into a non-religious memorial.
"The Latin cross is not embraced by non-Christians or used by them as a symbol of death or sacrifice," the group writes in its brief to the Supreme Court. "Some faiths even view it as a symbol of their religious oppression."
"Plaintiffs have each regularly encountered the Cross as residents, and two of them cannot avoid the Cross in the course of their ordinary routines," the brief continues.
The Jewish War Veterans of America, in a supporting brief, argues that 11,000 Jews in Prince George's County, Maryland, are subjected each day to overt government discrimination against patriotic soldiers who are not Christian.
"What they see when they look at the County's war memorial is a 40-foot high representation of the preeminent symbol of Christianity," the group argues.
A federal district court upheld the constitutionality of the cross, reasoning that it served a secular purpose not the promotion of religion. But the Fourth Circuit Court of Appeals later reversed that decision, agreeing with critics that it unambiguously promotes Christianity and entangles government and religion.
The American Legion and Maryland Planning Commission, which are defending the cross, say it serves a secular purpose — honoring war dead — and cannot be considered apart from a long history and tradition of Christian symbols in American life.
"The Commission's display and maintenance of the Peace Cross does not violate the Establishment Clause because it does not coerce belief in, observance of, or financial support for religion, and would survive any other test applied by this Court," the American Legion wrote in court documents.
Dozens of religious, law enforcement, military and civic organizations have filed friend-of-the-court briefs defending the cross.
"To disable the government from the use of religious symbolism to acknowledge important aspects of our history is to 'evince a hostility to religion' that is inconsistent with the Establishment Clause," argue a group of 84 members of Congress.
"The Federal Government frequently uses crosses as symbols of courage, sacrifice and remembrance, or otherwise permits commemorative crosses to stand on federal land," they said.
Two prominent monuments at risk, according to the group, are the Argonne Cross, a 13-foot white marble Latin cross, and the Canadian Cross, a 24-tall granite cross, both on display in Arlington National Cemetery. Cross-shaped monuments also dot national cemeteries, battlefields, national parks and military installations nationwide.
The Cross at Ground Zero — constructed in 2001 from steel beams recovered from the wreckage of the World Trade Center tower — is displayed at the National Sept. 11 Memorial and Museum in New York City.
"At least in the context of memorials, civic ceremonies, or similar practices that acknowledge or reflect the religious traditions of our people, this Court should look to this country's history and traditions, rather than mechanically applying” judicial tests, the lawmakers told the court.
The Maryland case offers the Supreme Court a chance to clarify what legal experts say has been an inconsistent and unhelpful legal standard enforced over the years.
"The Supreme Court's decisions concerning religious displays on public property are notoriously fact-intensive and difficult to reconcile," said constitutional lawyer Haley Proctor, who filed an amicus brief on behalf of 84 members of Congress in the case.
The court has previously approved public display of a menorah and Christmas tree in one city, but blocked erection of a nativity scene. On the same day in 2005, the court ruled that one state's public display of the Ten Commandments was permissible while a similar display in a different state was not.
"As Justice Thomas has said, under the court's decisions, the constitutionality of displays of religious imagery on government property is anyone's guess," said Proctor.
Now the justices have their first opportunity in more than a decade to set a new, clear rule for when religious displays are permissible on public property — and when they are not.
"As far as predictions go," Proctor said, "the widespread belief is that the court is likely to reverse the decision below and hold that the peace cross does not violate the establishment clause."
The big question, constitutional scholars say, is what reasoning the court will give — and whether they set a new single standard for future cases.
"The big question is whether a majority of the court is ready to endorse the view that Justices Scalia and Thomas have been proposing for some time, namely, that because memorials and displays using religious symbols do not coerce religious activities or entangle church and state, they are simply not 'establishments' of religion," said Notre Dame Law School professor Richard Garnett.
Copyright © 2019, ABC Radio. All rights reserved.