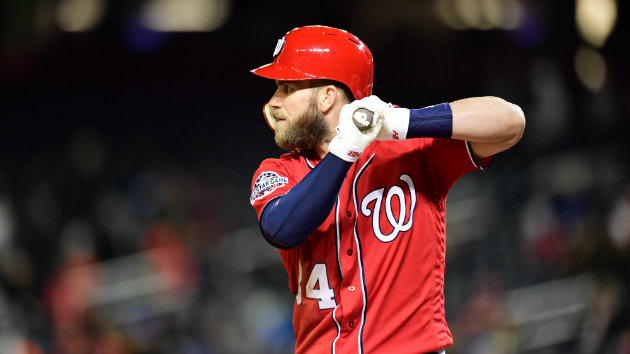 Scott Clarke / ESPN Images(NEW YORK) — Interest in free-agent slugger Bryce Harper is spanning from coast to coast.
Over the weekend, the right fielder met with the Philadelphia Phillies, who are prepared to sign the former National League MVP to a long-term contract, ESPN reports.
Meanwhile, the Los Angeles Dodgers have once again expressed interest in signing Harper to a short-term deal, according to ESPN. This comes after the Dodgers first contacted Harper's camp two weeks ago.
Sources tell ESPN that Harper is interested in a long-term contract. The 26-year-old is said to be looking for a better deal than the 10-year, $300 million contract the Washington Nationals reportedly offered him when the 2018 season came to a close.
Harper has spent his entire MLB career with the Nationals. He wrapped up last season with a .249 batting average, 34 home runs and 100 RBIs.
In October, he opted for free agency.
Copyright © 2019, ABC Radio. All rights reserved.