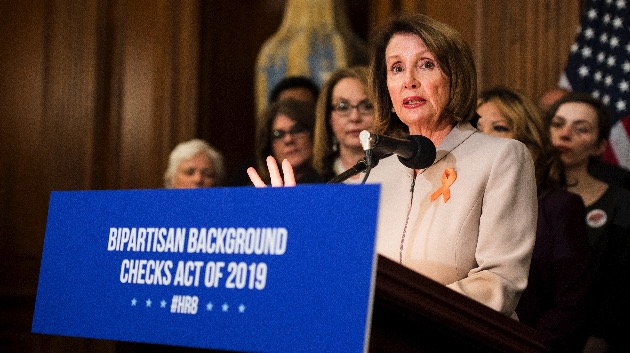 Bill Clark/CQ Roll Call(WASHINGTON) — An incendiary headline placed next to a picture of prominent Democrats in a magazine produced by the National Rifle Association is causing some backlash.
A spread in the March issue of American Rifleman, which is available online, shows a picture of Speaker Nancy Pelosi and former Rep. Gabby Giffords next to the headline "Target Practice," which has some questioning the editorial motives of the gun rights group.
The photo selection is at the heart of the backlash, as the picture shows Giffords, who was shot in the head and survived an assassination attempt in 2011, alongside Pelosi when the pair were at a recent press conference about a proposed background check law.
Underneath the large headline, there is a subhead that reads “Congressional Democrats target gun owners for persecution with extreme firearm transfer bans.”
The ensuing article, written by Chris Cox, one of the gun group's most prominent leaders and the executive director of the NRA's Institute of Legislative Action, derided Democrats for pushing the background check bill during the government shutdown "rather than to ensure that the country has a functional government."
The article introduced Pelosi as "arch anti-gunner." It also points out that the news conference was held on the anniversary of the "infamous and deplorable" 2011 shooting of Giffords, the article goes into the specifics of the shooter and how he passed a background check.
The executive director of Giffords, the former congresswoman's eponymous gun control activist group, released a statement slamming the spread.
"Fueling anger and selling fear has been one of the NRA’s most consistent tactics, and this reprehensible headline is just the latest example of their leaders' dangerous and irresponsible propaganda," Peter Ambler said in his statement.
"Evoking threats of violence should never be tolerated. Words matter. This headline should tell us all we need to know about how wildly out of touch the NRA is with its own members and how low they will stoop to advance their damaging agenda at the expense of our safety," Ambler's statement reads.
The NRA did not immediately return ABC News' request for comment.
Sen. Chris Murphy, D-Conn., who has been calling for more gun control laws in the wake of the Sandy Hook shooting, had his own theory behind the decision to pair that photo with the headline.
"Newsflash: they know what they’re doing here," Murphy wrote in response to a tweet about the spread.
Rep. Eric Swalwell, D-Calif., went further, calling for the NRA to "face legal consequences."
"This is a call for violence by the @NRA against @GabbyGiffords, who was nearly killed by gunfire and @SpeakerPelosi, the most powerful legislator in America. The NRA should face legal consequences. But let’s put them out of business with boycotts and ballot boxes. #EnoughIsEnough," Swalwell wrote in the tweet.
That sparked a response from Rep. Dan Crenshaw, R-Texas, who called Swalwell's comments an example of an attempt to promote "outrage culture."
Parkland activist David Hogg, who was at the background check news conference and stood behind Giffords at the event, tweeted about the NRA spread as well. He directed his tweet at Sen. Marco Rubio, R-Fla., asking the politician "why do you take money from an organization that calls for the assassination of politicians simply for their political beliefs."
Rubio did not appear to publicly respond to Hogg on Twitter, nor did his office immediately respond to ABC News’ request for comment.
Hogg also retweeted former Gov. Howard Dean, D-Vt., who tweeted that "The NRA has become an alt right organization promoting violence."
The magazine article is not the first time that the intentions of the NRA's press efforts have been questioned. Last year, they prompted some ire after tweeting out a picture of an AR-15 as the national student walkout was unfolding as a part of the March for our Lives, which was held to call for action on gun control in the wake of the deadly Parkland shooting.
Copyright © 2019, ABC Radio. All rights reserved.

Minneapolis scraps plans to pay social media influencers to spread information during Chauvin trial
CPAC speakers tout Trump, spread debunked election claims
Milli Vanilli biopic dropped by film company, controversial director Brett Ratner may be the reason why
Gyms with maskless users shown to be at high risk for COVID spread: Study
Ted Cruz under fire for ‘photo ops’ in Houston following controversial Mexico trip
NRA is ‘out of ammo’ as it faces a legal mess of its own making, many experts say