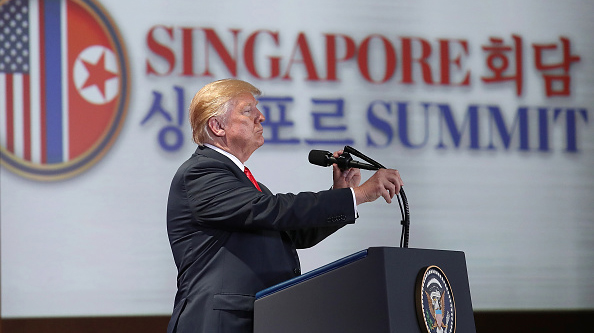 Win McNamee/Getty Images(WASHINGTON) — As President Donald Trump prepares to continue negotiations with North Korean leader Kim Jong Un this week, he does so with added pressure to deliver results, while Kim has already won a victory in that diplomatic talks are happening at all, several North Korea analysts told ABC News.
Eight months after their first meeting in Singapore in 2018, there is little sign that North Korea has moved to denuclearize. And by dragging out talks with the U.S., Kim gains more time to advance his country’s nuclear capabilities and demand economic concessions from the U.S., analysts said.
The two leaders plan to meet later this week in Hanoi, Vietnam, to pick up their face-to-face talks on North Korea’s nuclear weapons program, and its relations with the U.S. and neighboring countries.
“Kim Jong Un is now even better positioned to milk his adversary, the United States — that is, to further ensnare the Trump administration into this protracted process of negotiation without really reaching any meaningful resolution,” Sung-Yoon Lee, a professor of Korean studies at The Fletcher School at Tufts University, told ABC News.
Over the past few months, Trump has pointed to North Korea holding off on missile and nuclear tests as a win for the U.S., but analysts said North Korea did not necessarily need to carry out tests to make progress, and that those tests could always resume.
Trump, more than Kim, has defended the diplomatic process, and has more staked on its success, especially as he faces political pressure at home, according to Victor Cha, who served as director for Asian affairs at the National Security Council from 2004 to 2007, and now serves as senior adviser and Korea chair at the Center for Strategic and International Studies in Washington.
“The timing, given what’s happening domestically, makes him a lot more vulnerable,” said Cha. “Vulnerable to taking bad deal.”
Priorities for North Korea include relief from economic sanctions and a Korean War peace agreement — and by extension, the pullout of U.S. troops from South Korea — helping to ensure the Kim regime’s long-term survival, analysts said. Kim has also used diplomacy to legitimize himself on the world stage, potentially leading to meetings with more leaders.
While Kim looks more comfortable now — stretching out the process to reap economic sanctions relief — like Trump, he faces the prospect that elections in the U.S. next year may result in a new president who might not carry on diplomacy, according to Jean Lee, former chief of the Associated Press’ bureau in North Korea’s capital, Pyongyang.
“They want to take advantage of this golden opportunity with Trump in office,” said Jean Lee, who now directs the Hyundai Motor-Foundation Center for Korean History and Public Policy at the Wilson Center in Washington. “They’ve been doing this for a quarter century — they know policy could turn on a dime.”
However, if Kim cannot obtain meaningful sanctions relief from the Trump administration, it could hurt him domestically, according to Jung Pak, a senior fellow and the SK-Korea foundation chair in Korea Studies at the Brookings Institution’s Center for East Asia Policy Studies in Washington.
“The risk to him is that the sanctions will remain and they’ll get stronger,” Pak said. “Because he has so personally taken ownership of economic development, he has to deliver.”
It remains in Kim’s interest for Trump to keep seeing diplomacy as the answer, according to Cha.
“The last thing he wants is for Trump to walk away and say, ‘I can’t do business with this guy,’” he said.