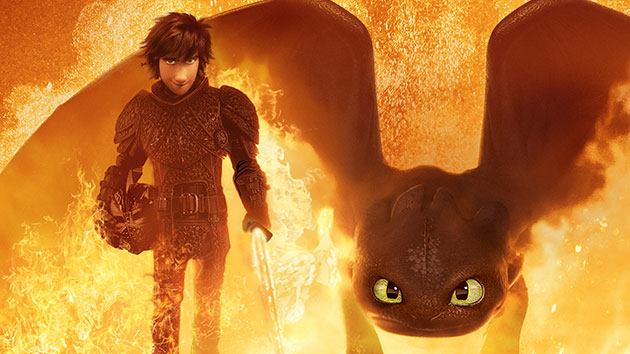 Universal(NEW YORK) — How to Train Your Dragon: The Hidden World topped the weekend box office, delivering an estimated $55.5 million for a franchise-best opening weekend, unseating How to Train Your Dragon 2's debut by a little over $6 million. The animated film — featuring the voices of Cate Blanchett, T.J. Miller, Kristen Wiig, America Ferrera, Jonah Hill, Kit Harington and F. Murray Abraham — also marks the largest debut of 2019 so far, surpassing Glass, which grabbed $46.5 million in January. Adding in The Hidden World's exclusive Fandango event earlier this month, the film has collected upwards of $58 million stateside.

How to Train Your Dragon: The Hidden World is doing even better in its seventh weekend of international release, delivering $216.9, which brings its worldwide numbers to just under $275 million.

Alita: Battle Angel finished in second place, delivering an estimated $12 million, a 58% drop over its debut weekend earnings. On the plus side, it's so far brought in $202 million overseas for a global tally of better than $263 million.

Fighting with My Family nabbed an estimated $8 million in its first week of wide release — less than expected, but good enough for a fourth-place finish.

Isn't It Romantic rounds out the top five with an estimated $7.5 million in its second week of release, bringing its domestic total to just shy of $34 million.

The last of this weekend's new releases, Run the Race, finished in 10th place, taking in an estimated $2.27 million from 853 theaters.

California commits $1.4 million to combat ‘horrific’ attacks on Asian Americans
Biden to make 25 million masks available at community health centers, food banks
Daniel Kaluuya says he “wasn’t invited” to the world premiere of ‘Get Out’
Vaccination call center for seniors receives nearly 1 million calls in a day
US crosses new COVID-19 milestone: Half a million Americans dead
As US surpasses half a million COVID-19 deaths, Latinos continue to feel impact of virus