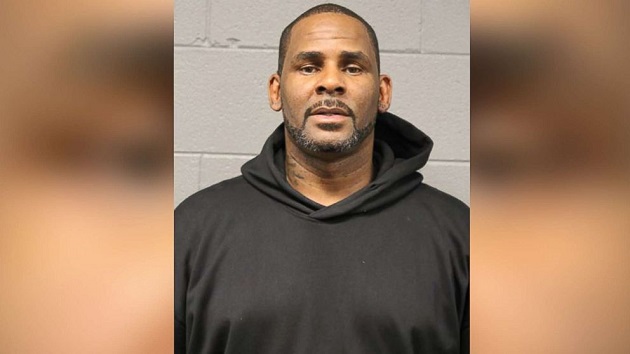 Chicago Police Department(CHICAGO) — After a weekend in jail, singer R. Kelly is hoping to get his freedom back on Monday following his upcoming hearing Monday on multiple sexual assault charges.
The 52-year-old embattled star, whose given name is Robert Sylvester Kelly, is scheduled to be in court on Monday, during which he will have the opportunity to enter a plea to the charges, and a judge will be assigned to oversee his case.
Meanwhile, seemingly frustrated that the legendary R&B singer remained behind bars, some of his more proactive female fans have been calling Chicago's Cook County courthouse clerk to inquire about helping to pony up the $100,000 cash Kelly would need to meet his $1 million bond and be released, according to Chicago Tribune reporter Will Lee.
Kelly's attorney told reporters on Sunday night that he hoped his client could collect the required $100,000 on Monday and pay his way to his release from jail.
"Banks are closed early on Saturday," defense attorney Steve Greenberg explained on Sunday night. "You need to wait until the banks open up, you can't just walk in and write a personal check, no matter who you are."
Greenberg said that no matter how things unfold, Kelly will not be immediately released following Monday's hearing.
"The hearing … he will still be in custody [and] he's going to have to go back to the jail, regardless of what time the bail is posted," Greenberg said.
On Saturday, a Chicago judge ordered $1 million bond for Kelly after the singer surrendered on Friday night and was charged with 10 counts of aggravated criminal sex abuse.
Cook County Judge John Fitzgerald Lyke Jr. also ordered Kelly to turn in his passport and forbade contact with the singer's alleged victims. Kelly was indicted on Friday for a decade of sexual assault and abuse against four victims, three of whom were under the age of 17. Bail was set for $250,000 for each case.
Kelly did not react during the hearing. He sat with a straight look on his face, wearing a black hooded sweatshirt with his hands crossed behind his back throughout the hearing. Kelly only spoke with his lawyer while Lyke reviewed the charges, calling the prosecutors' claims “disturbing.”
Greenberg, Kelly's criminal lawyer, told the judge his client wasn’t a flight risk because “contrary to the song ['I Believe I Can Fly'], he doesn’t like to fly.”
Greenberg added: “He can’t go anywhere anyways. He’s a recognizable person.”
Copyright © 2019, ABC Radio. All rights reserved.