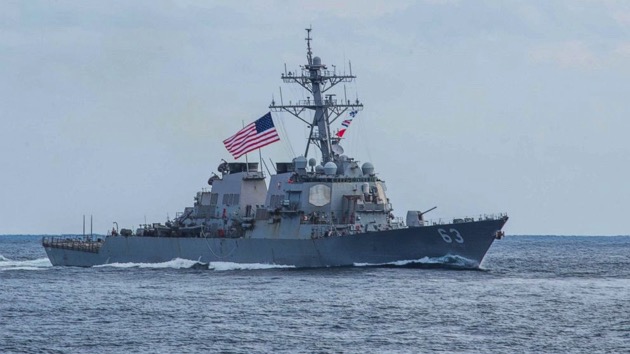 Kelsey J. Hockenberger/U.S. Navy, FILE(WASHINGTON) — It has happened again, two U.S. Navy ships have sailed through the Taiwan Strait, the fifth time in eight months that Navy ships have sailed through the body of water that divides China and Taiwan.
U.S. Navy trips through there were once rare, but with the increased frequency at a time when the U.S. and China have been engaged in a months-long trade dispute is certain to draw sharp criticism from China.
"USS Stethem (DDG 63) and USNS Cesar Chavez (T-AKE-14) conducted a routine Taiwan Strait transit on Feb. 25 (local time), in accordance with international law," Lt. Cmdr. Timothy Gorman, a spokesman for the U.S. Navy's Pacific Fleet, said in a statement.
"The ships' transit through the Taiwan Strait demonstrates the U.S. commitment to a free and open Indo-Pacific," said Gorman. "The U.S. Navy will continue to fly, sail and operate anywhere international law allows."
China has criticized previous U.S. Navy passages and Monday's transit will likely prompt the same reaction.
The transits have occurred as both the U.S. and China have engaged in a months-long trade dispute. Over the weekend President Donald Trump announced he would not implement additional trade tariffs on China, slated to kick in on March 1, because of progress in ongoing talks between the two countries to end the dispute.
Until the recent stretch of U.S. Navy transits began last July, the last time an American warship had sailed through the strait was in July 2017.
So far the U.S. has chosen to use smaller warships and supply ships for the Taiwan Strait transits. U.S. officials have said that using an aircraft carrier for a transit has been under consideration.
The last time an American aircraft carrier sailed through the strait was in 2007. At the time, the U.S. Pacific Fleet said it was a move to avoid bad weather on a scheduled sail.
There are also tensions over China's growing military presence on man-made islands in the Spratly Islands in the South China Sea. U.S. Navy ships have continued to sail past those islands claimed by China to demonstrate freedom of navigation through international waters.
China has increasingly begun to harass the U.S. ships as they conduct those passages through the Spratlys.
The closest call yet was in mid-October when a Chinese navy ship came within 45 yards of the destroyer USS Decatur as it carried out a freedom of navigation passage through international waters close to those islands.
Another irritant in the U.S.-China relationship continues to be American support for Taiwan. The U.S. continues to sell military weapons to the island nation even though it does not have diplomatic relations with Taiwan. China maintains Taiwan is a breakaway province and not an independent nation.
Copyright © 2019, ABC Radio. All rights reserved.