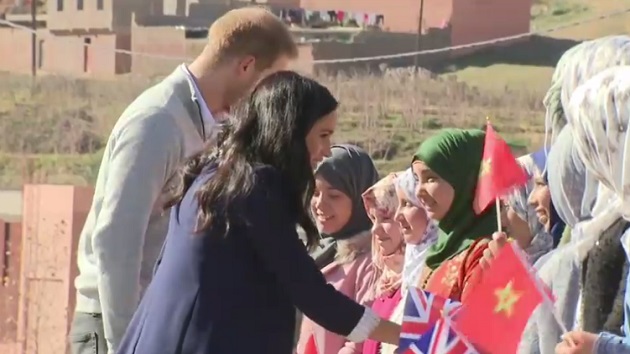 ABC News(MARRAKESH, Morocco) — The Duke and Duchess of Sussex have kicked off their three-day trip in Morocco.
The red carpet was rolled out for their royal highnesses, who arrived late Saturday, after their Royal Air Maroc plane was slightly delayed.
They were greeted on arrival by a guard of honor and the British ambassador, Thomas Reilly. Meghan looked glamorous in a red Valentino dress and surprisingly fresh given that she has just returned from a fun-filled, five-day trip to New York.
They are staying as the guests of King Mohammed VI of Morocco at a private royal residence. The pair have a full agenda lined up for them and, according to a spokesperson at Kensington Palace, "They are particularly pleased that they will have the opportunity to meet so many young Moroccans over the next few days."
The British ambassador explained earlier to reporters the key themes of the royals’ visit.
“This official visit by The Duke and Duchess of Sussex will highlight Morocco’s focus on women’s empowerment, girls’ education, inclusivity, and the encouragement of social entrepreneurship.”
It is expected that this will be the last foreign trip the Duchess will make before the birth of her first child this spring. And “medical provisions had been made” for Meghan while she is in Morocco, sources confirmed.
Their first official engagement was on Sunday in the small town of Asni in the foothills of the Altas mountains. There, the Duke and Duchess visited young girls who are living in boarding houses provided by the Moroccan NGO "Education For All."
The girls, mostly aged between 12 and 18, come from rural communities in the High Atlas Mountains region. The NGO gives them the opportunity to access secondary education.
Several of the girls lined up excitedly, waving the Moroccan and British flags outside the boarding house and Hasnaa, 16, gave the Duchess a bouquet before she went inside.
The Duchess had her hand decorated in henna. She was given a special tattoo to mark her pregnancy, a ceremony that is meant to bring luck to the baby.
The pair also showed off their French as they spoke to the girls in one of their languages.
The next stop for the Duke and Duchess was a visit to a local secondary school, where they met both students and teachers.
Prince Harry and his wife also saw some of the sportier children show off their football prowess, before going on to the original "Education For All" boarding house.
There, the Duke invested Michael McHugo, the founder of "Education for All," with the Most Excellent Order of the British Empire. This honor was given to him in recognition of his charitable work in Morocco.
Harry and Meghan will attend a reception this evening at the British Ambassador’s Residence in Rabat, where they will meet influential Moroccan women, young entrepreneurs and disabled athletes amongst others.
The young royals will round out their visit with further engagements in Rabat on Monday, starting with a visit to a riding school, followed by a cooking lesson with a Moroccan chef. According to royal sources, they will cook a recipe from Meghan’s cookbook, "Together."
They are also due to have an audience with the Moroccan King. The couple will continue their stay privately as guests of the king on Tuesday.