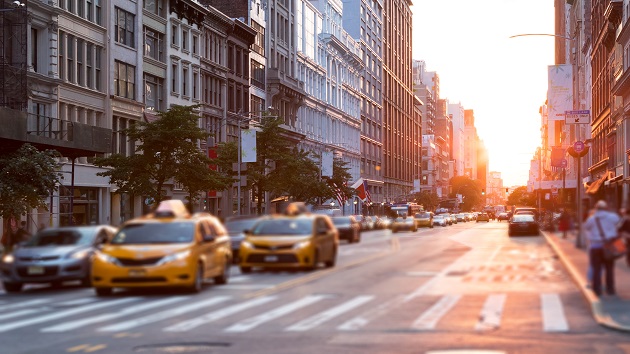 iStock/deberarr(NEW YORK) — New York state Sen. Daphne Jordan is dividing the Empire State into two sides — literally.
Jordan introduced a bill last week that would study the feasibility of breaking New York into two separate states: Upstate and Downstate. The two regions have long been at odds with each other on many things — politically, economically and even football teams (Buffalo Bills vs. New York Jets or Giants).
The study would be conducted by a 15-person working group led by the state comptroller, currently Thomas DiNapoli, and it would look into "the process and ramifications of separating upstate and downstate New York into two separate states."
"This legislation would create a working group that would study the short and long term economic ramifications, including economic opportunities, of splitting the state," according to the bill. "It would also examine the legal ramifications and precedents for dividing the State into two parts, and would determine the 'up front cost' of doing so, such as creating two new State government apparatuses."
Downstate New York would include the five boroughs of New York City and Nassau, Rockland, Suffolk and Westchester counties — essentially Long Island and the two counties just above the city. Upstate New York would include every other county in the state — all 53 of them.
The population, based on the 2010 Census, would actually be higher in Downstate (11,957,128) than Upstate (7,420,974) despite the massive size difference.
"There's all kind of things being passed [in Albany] that aren't necessarily of upstate interest," Jordan told The Associated Press.
Jordan, a Republican, represents all or part of four upstate counties: Columbia, Rensselaer, Saratoga and Washington.
The bill doesn't have a sponsor in the Assembly, but Republican Assemblyman Stephen Hawley proposed similar plan in January. Right now, Jordan's bill remains in committee and would need to pass a vote in both the Senate and Assembly and earn the governor's signature just for the study to begin.
The push isn't the first, or even the only current, movement to break New York into two separate states.
Divide NYS Caucus, Inc. is a group that is working to do something similar to Jordan, though it proposes three "autonomous regions" comprised of New York City, Long Island and New Amsterdam (all the land that remains).
Breaking New York into multiple states requires an act of Congress, something deemed unlikely by Divide NYS Caucus due to the resulting addition of two U.S. Senate seats, so it prefers three regions led as their own municipalities along with a token statewide government.
Peter Vallone Jr., then a city council member from Queens, introduced bills for New York City to secede from the state on multiple occasions in the early 2000s. Neither attempt went much of anywhere besides some hearings in the city council.
California went through a similar process in 2018 when a proposal to separate the state into three parts was added to the ballot. But a court later barred the plan and it was never voted on.
Never say never for New York state though. It's happened once before. In 1777, a chunk of northeastern New York tried to secede from the state. It's now Vermont.
Copyright © 2019, ABC Radio. All rights reserved.