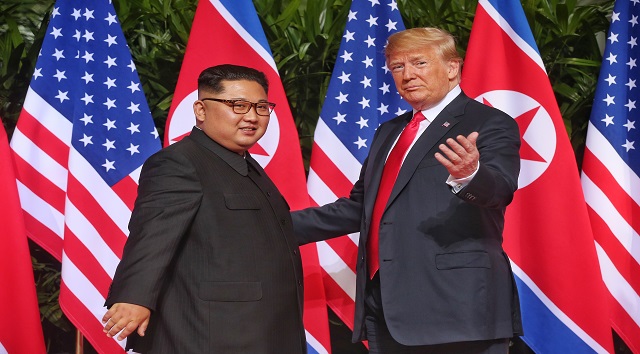 Kevin Lim/THE STRAITS TIMES/Handout/Getty Images(WASHINGTON) — When President Trump touches down in Vietnam this week for his second summit meeting with North Korean leader Kim Jong Un, he will be under pressure to demonstrate what meaningful progress has been made since the first meeting and what the U.S. stands to gain going forward.
The president likes to tout that much has been accomplished already and boldly declared in his State of the Union address that the United States would “be in a major war with North Korea” if not for his diplomatic engagement.
“A lot was done in the first summit. No more rockets going up. No more missiles going up. No more testing of nuclear,” Trump said in the Rose Garden earlier this month. “I'm in no rush for speed. We just don't want testing.”
But the president’s rosy assessment of the progress made has been contradicted by his own intelligence community and many leading North Korean experts, who note that North Korea has taken no concrete steps toward denuclearization since the first summit in June.
“We currently assess that North Korea will seek to retain its WMD capabilities, and is unlikely to completely give up its nuclear weapons and production capabilities because its leaders ultimately view nuclear weapons as critical to regime survival,” said Dan Coats, director of national intelligence, in congressional testimony last month.
He added that the intelligence community's assessment “is bolstered by our observations of some activity that is inconsistent with full denuclearization.”
Victor Cha, an expert on North Korea and a senior adviser at the Center for Strategic and International Studies, says the stakes for the second summit are particularly high because there have been no tangible steps toward demilitarization taken since the first meeting.
"I think there’s a great deal of pressure on both actually, both leaders to produce tangible results out of this second meeting, since the first meeting effectively laid out a statement of principles between the two leaders about what the endgame or the outcome of these negotiations should be," Cha said in a briefing with reporters. "If this second meeting does not produce actual tangible steps — whether it’s on peace, on normalization, or on denuclearization — I think it will widely be seen as a failure and will really raise questions about whether this process has ended."

The goal of denuclearization

Administration officials say the principal goal heading into negotiations is to make progress toward North Korea’s full and complete denuclearization.
“It is ultimately about the denuclearization of North Korea, that was what was agreed already between the two sides, and that is the overriding goal that President Trump is seeking to achieve with this summit,” a senior official, who spoke on the condition of anonymity, told reporters.
But even as the administration continues to make the case that meaningful progress has already been made to that end, another senior official conceded that they didn’t know whether North Korea had in fact decided to denuclearize.
“I don’t know if North Korea has made the choice yet to denuclearize, but the reason why we’re engaged in this is because we believe there’s a possibility that North Korea will make a choice to denuclearize,” the official said.
Another complicating factor in advancing that goal: the United States and North Korea hold vastly different understandings the definition of denuclearization.
“The United States and North Koreas, simply put, do not define denuclearization the same way,” former Deputy Assistant Secretary of State Evans Revere said in an interview with ABC News. “And so here we are a few days away from a summit, and we still don't have a definition of what denuclearization means. That's not an insubstantial problem.”
In the joint statement signed during the Singapore summit, the U.S. and North Korea committed to "the denuclearization of the Korean Peninsula.” The U.S. took that to mean that North Korea would give up its nuclear capabilities, but Revere says North Korea has a very different interpretation of the term.
The North Korean interpretation "means the end of the U.S.-South Korean alliance, the end of the U.S. military presence, the end of the U.S. nuclear umbrella, and the end of America's ability to wage war against North Korea,” Revere said.
The fact that the U.S. would have even agreed to use the term “the denuclearization of the Korean peninsula” — which Revere said is a North Korean term — represented a stunning concession.
“When I first read the Singapore summit declaration, I almost fell off the chair," Revere said. "I mean, we were using North Korean language in that statement. It was it was just astonishing to me that the president would have signed that. But here we are."
The administration has acknowledged the challenge that is posed by the diverging understandings of the term. A senior official said reaching a shared understanding will be a top priority for the second summit.
“We’ll be seeking to advance, which is a shared understanding of what denuclearization is. That’s one of the places we think we think we can successfully build in a joint statement and it’s certainly a high priority,” the official said.

No rush
President Trump has repeatedly said he’s in no rush when it comes to North Korea, expressing satisfaction that at least there have been no missile launches and testing since the last summit.
While the pause in testing is an indisputably positive development, Revere worries that the president has sent a message to the North Koreans that they are free to drag their feet.
"By removing the sense of urgency, what the president is essentially saying is that this is an open-ended process, which plays into the hands of the of the North Koreans because their goal is to make this an interminable and open-ended process that does not lead to denuclearization. So the president is, I think, falling into a trap here by removing the timeline," Revere said.
A senior administration has sought to clarify that the president's stated patience doesn't mean it’s not a high priority for him and said the U.S. is looking to move quickly in pushing North Korea forward.
“I think we actually need to move very quickly in the process and I think we need to move in big bites, so we are not looking to have incremental steps as a key driver of this process,” the official said.
Heading into the second summit, Revere warns, Kim will seek to create the “illusion” that he is taking legitimate steps toward denuclearization, without giving up anything of real value.
“They have the desire, I think, to create what I call the illusion of denuclearization, that they're taking steps that seem to be moving us towards a reduction of the threat and denuclearization, but the reality is that they're not,” Revere says.

A bad deal
Beyond the concern that the U.S. will gain few real concessions from North Korea in the course of negotiations, experts also express concern that Trump could make potentially damaging concessions.
"The operative question for the summit then becomes: what is the United States going to give up in return for those underwhelming concessions?" Cha said. "And I think this is where, you know, the president’s unpredictability, his impulsiveness, his inclination not to prepare for meetings could get us into trouble. I mean, I think that is the concern.
"In Singapore, the only tangible concession that was really made in Singapore was the president’s decision, impulsively, to suspend U.S.-South Korean military exercises," Cha continued. "I think the worry is that, are we going to see a repeat of that in … this meeting next week wherefore some underwhelming concessions the president is going to put things on the table … that could do long-lasting damage to or erode the alliance."
One such potential outcome that has caused alarm among regional experts and observers is whether the president might consider shrinking the numbers of U.S. troops stationed in the region. But administration officials say the issue is not on the table and has not been discussed in the course of negotiations with North Korea.
“What you just raised is not the subject of discussions,” an official said when asked whether U.S. troop withdrawal is under consideration. “What you just raised isn’t really an operative subject right now."
Sue Mi Terry, a senior fellow at CSIS, says she's worried about the potential pitfalls surrounding a possible peace declaration to declare the end of the Korean War.
"The concern is that it will be a slippery road to a peace treaty," Terry said. "That would eventually undermine the rationale for maintaining U.S. troops in South Korea. Trump might not say, 'Hey, we’re going to pull out the U.S. troops,' but if there is a peace declaration … and then North Korea might insist that they’re not seeking to kick U.S. troops out of South Korea."
If the second summit is to succeed in earnest, Cha said, it’s essential that it deliver in ways he says the first summit failed.
“We just can't have another Singapore statement where there's a bunch of very lofty and ambiguous principals that the two agree on. They actually need to make progress this time and if they don't make progress, then everybody's going to call it a failure,” Cha said. “I think progress from a U.S. sort of policy perspective is the first and most important step, which is a full and verifiable declaration of all their capabilities.”
But what exactly will be delivered out of the second summit remains to be seen.
Senior administration officials have declined to discuss any specifics that are currently under active negotiation with the North Koreans and only said they are working toward a joint statement that will advance key objectives that were previously agreed to in Singapore.
One official said the U.S. will need to see, “eventually,” a “full declaration of weapons of mass destruction” that North Korea possesses. Such a declaration would be a significant step if it were achieved, but Revere doubts that a declaration will come from the summit.
"That may be a bridge too far," Revere said. "The North Koreans have been quoted as saying that for them to provide such a declaration would be providing the United States with a target list, as if the United States is somehow going to attack these things, and basically destroy the entire diplomatic process, alienate our South Korean allies, and start a war on the Korean peninsula — highly unlikely. But this is the way the North Koreans think. I understand how they think. So we're unlikely to get that."
While the administration has declined to characterize how much preparation the president is doing ahead of the Hanoi summit, an official said, Trump will be ready.
“The president’s doing everything necessary to be well prepared for this summit,” an official said.