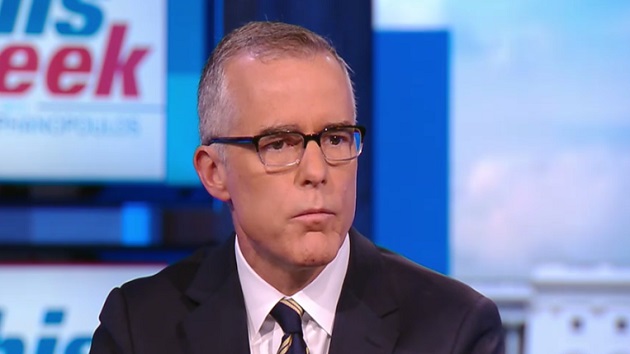 ABC News(NEW YORK) — Former FBI Deputy Director Andrew McCabe doubled-down on ABC News' "This Week" over his insistence that it was a national-security imperative for him to open up counterintelligence and obstruction probes of President Donald Trump after Trump fired James Comey as FBI director in May 2017.
"The information that was in our hands at the time, much of which was publicly known, caused us great concern," McCabe told ABC News chief anchor George Stephanopoulos on Sunday. "At the time, the facts clearly indicated that we had an [actual] basis to believe that a crime may have been committed, and that a threat to national security might exist."
Simply put: "We needed to investigate," McCabe said.
McCabe's appearance on Sunday came after days of back-and-forth between McCabe and Trump, with the president repeatedly taking to Twitter to attack McCabe's assertions as an "absurd" collection of "lies."
Claiming that he had an obligation to the country to investigate Trump, McCabe has pointed to what he sees as Trump's soft rhetoric on Russia, Trump's alleged request that Comey lay off investigating former national security adviser Mike Flynn's contacts with Russians, Comey's ultimate firing, and Trump's years-long attacks on federal probes looking at whether Trump's presidential campaign in 2016 may have coordinated efforts with Russian operatives.
"It was a time that we needed to take bold and unconventional steps, things that I don't think any of us were comfortable with, things that none of us ever imagined doing," McCabe told reporters on Thursday.
For the past week, Trump has railed against McCabe, who briefly became acting director of the FBI when Comey was fired and is now on a national tour promoting his new book, "The Threat: How the FBI Protects America in the Age of Terror and Trump."
"Wow, so many lies by now disgraced acting FBI Director Andrew McCabe," Trump tweeted on Monday. "He was fired for lying, and now his story gets even more deranged."
On Sunday, McCabe described Trump's criticisms as "bizarre and untrue," adding, "I don’t think there's anything sad or unfortunate about speaking truth to power."
McCabe was fired from the FBI last year, just days before he was set to retire from two decades of government service. The Justice Department's inspector general found McCabe had misled internal investigators over a disclosure to a reporter. McCabe has said any inaccurate statements he made were not deliberate, and Sunday he said he "deeply" disagrees with the inspector general's findings.
Federal prosecutors are now weighing whether charges are warranted, but McCabe said he has "no doubt" that Trump's attacks on him have "impacted" the entire "process."
"He made his desires perfectly clear on his own Twitter feed, the inspector general delivered that result," the former FBI official noted.
McCabe and his legal team are now drafting a civil lawsuit to file against the Trump administration "challenging the circumstances of my firing," McCabe said on "This Week."
In dismissing McCabe's latest claims this past week, Trump was referring to McCabe's recent account of meetings with Deputy Attorney General Rod Rosenstein in the days after Comey's firing, when — according to McCabe — Rosenstein raised the prospect of wearing a wire into the White House to secretly record Trump and passingly mentioned the possibility of invoking the 25th Amendment to remove Trump from office.
Rosenstein and McCabe both acknowledge no steps were taken to actually make either of those suggestions a reality, but people close to Rosenstein have insisted the deputy attorney general was speaking in jest. McCabe disputes that the comments were in jest.