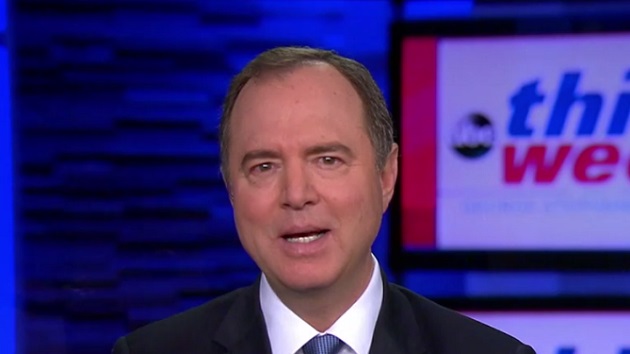 ABC News(NEW YORK) — House Intelligence Committee Chairman Adam Schiff said that his committee would subpoena special counsel Robert Mueller’s final report and even call him to testify before the committee if the report was not made public, and that he was “absolutely” prepared to sue the Trump administration, if necessary.
“We will obviously subpoena the report. We will bring Bob Mueller in to testify before Congress. We will take it to court if necessary,” Schiff, D-Calif. said Sunday.
“In the end I think the [Justice] Department understands they're going to have to make this public. I think [Attorney General William] Barr will ultimately understand that as well.”
ABC News Chief Anchor George Stephanopoulos asked, “Are you prepared to take the administration to court?”
“Absolutely. We are going to get to the bottom of this. We are going to share this information with the public,” Schiff said. “And if the president is serious about all his claims of exoneration, then he should welcome the publication of this report.”
Amid speculation that Mueller would be delivering his report to Barr as early as this week, a Justice Department official with knowledge of the matter told ABC News Friday that the report is not imminent.
Mueller has been looking into Russian interference in the 2016 presidential election, including whether anyone associated with the Trump campaign may have coordinated efforts with Russian operatives.
In a letter to the newly confirmed attorney general Friday, House Judiciary Committee Chairman Jerry Nadler, Schiff and the Democratic chairs of four other House committees, made clear to Barr that they expect Mueller’s report to be made public.
“After nearly two years of investigation — accompanied by two years of direct attacks on the integrity of the investigation by the president — the public is entitled to know what the Special Counsel has found,” the letter reads. “We write to you to express, in the strongest possible terms, our expectation that the Department of Justice will release to the public the report Special Counsel Mueller submits to you — without delay and to the maximum extent permitted by law.”
During his confirmation hearing, Barr did not give a guarantee that he would release Mueller’s full report, something Democrats repeatedly sought assurance on.
"My goal and intent is to get as much information out as I can, consistent with the regulations," he told the Senate Judiciary Committee in January.
On “This Week,” Schiff said that if Barr, "were to try to withhold, to try to bury any part of this report, that will be his legacy, and it will be a tarnished legacy, so I think there will be immense pressure not only on the department, but on the attorney general to be forthcoming."
Contrary to Barr’s assertion in his confirmation hearing, Schiff said that Justice Department regulations would allow Barr to release the report in its entirety.
“Bill Barr has committed in his testimony to making as much of the report public as he can. And the regulations allow him to make it all [public]. We’re going to insist on it becoming public,” Schiff said.
Schiff specifically noted he wants the underlying evidence to be made public.
“Under Justice Department regulations, officials have said that if you decline to prosecute someone, then the underlying evidence should not be released,” Stephanopoulos pressed.
Schiff said the department has “violated that policy” over the last two years, and said it established a new precedent when it “turned over thousands and thousands of pages of discovery in the Clinton email investigation, and there was no indictment in that investigation.”
“There is certain evidence [that] is only in the hands of the Department of Justice that we can't get any other way. There were searches conducted, for example, of Roger Stone and Paul Manafort,” he said of Trump's former adviser and his former campaign chairman. “There’s no other way to get the information that was seized except through the department and we can't tell the country fully what happened without it.”
The House Intelligence Committee chairman added that in addition to that precedent, the “intense public need to know” Mueller’s findings “overrides any other consideration.”