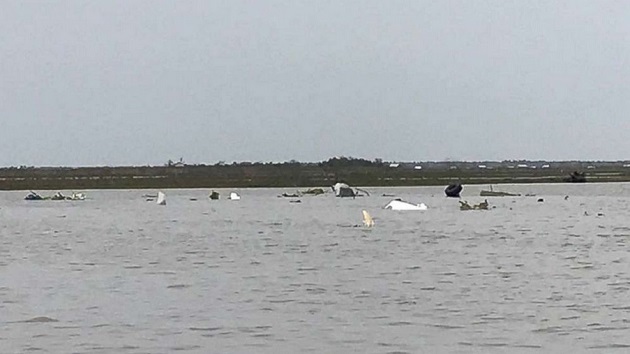 Chambers County Sheriff's Office(HOUSTON) — One body has been recovered and two other people are missing and feared dead following the crash of a twin-engine cargo plane into a bay near Houston Saturday afternoon, officials said.
The Boeing 767 jetliner, which was flying from Miami to Houston, crashed into the Trinity Bay near Anahuac just before 1 p.m., officials said.
The plane was operating "on behalf of Amazon" and three people were on board, according to a statement released by Atlas Air Worldwide. Amazon officials confirmed Atlas' statement, but directed questions about the missing passengers to Atlas.
The prospects of anyone surviving the crash appeared thin, local officials said.
“I don’t believe that there is anyway anyone could have survived,” said Chambers County Sheriff Brian Hawthorne at an evening press conference.
Hawthorne said that multiple dive teams on hand have discovered human remains, but have yet to locate any black boxes, which contain the aircraft's flight recorder.
The sheriff said he expected that the investigation could go on for weeks.
"Our thoughts and prayers are with the flight crew, their families and friends along with the entire team at Atlas Air during this terrible tragedy," Dave Clark, Amazon's Senior Vice President of Worldwide Operations, said in a statement. "We appreciate the first responders who worked urgently to provide support.
Flight 3591, operated Atlas Air Inc., went off radar and lost radio contact about 30 miles from Houston's George Bush International Airport, according to an alert from the Federal Aviation Administration (FAA).
Investigators from the FAA and the National Transportation Safety Board (NTSB) are also involved in the nascent probe. The NTSB will be in charge of the investigation.
U.S. Coast Guard officials said in a statement that rescuers are searching for three crew members. The officials said that the Houston Police Department, Texas Park and Wildlife, and the Harris County Sheriff's Department, among other agencies, were assisting with the search.