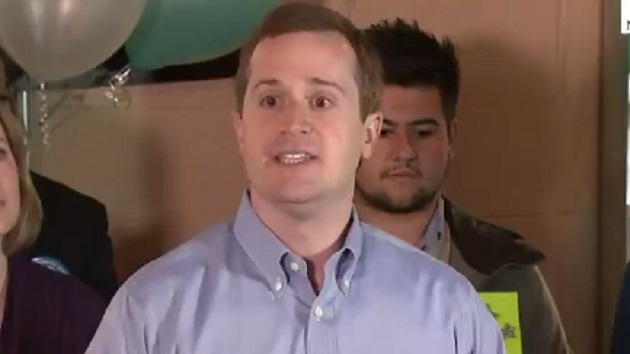 ABC News(RALEIGH, N.C.) — After a dramatic, months-long investigation into allegations of a widespread, coordinated and possibly illegal ballot tampering scheme, election officials in North Carolina have ordered that a new election be held in the state's 9th Congressional District, a decision that reverberated across the American political landscape and could reframe the national conversation about election fraud.
"I believe the people of North Carolina deserve a new election," Robert Cordle, the chairman of the North Carolina state board of elections, said Thursday. "It was certainly a tainted election."
The new election will be the first congressional election to be redone since 1974, and while details on when it will be held and which candidates will be on the ballot are still unknown, the race will undoubtedly attract national attention and millions of dollars in national money.
Here's a look at the unexpected twists and surprises that led to a new election.

A narrow victory is called into question
Republican candidate Mark Harris, who defeated incumbent GOP Rep. Robert Pittenger in the 9th District's May primary, declared victory in the general election on November 6 over Democrat Dan McCready, even as just 905 votes separated the two candidates in unofficial results.
McCready conceded the next day, saying it has been "my true honor to fight alongside you all on this campaign."
For weeks after Election Day, Harris was presumed to be the next congressman from North Carolina's 9th Congressional District. But in a surprise move in late November, the state board of elections voted not to certify the results.
Soon after evidence began to surface of abnormalities in the absentee vote totals in rural Bladen County, and a possibly illegal system of collecting absentee ballots run by a man named McCrae Dowless, who was hired as a consultant on Harris' campaign.
McCready then retracted his concession on Dec. 6, a month after the election, as it became clear that major doubts were being cast on its fairness.
Dowless denied any wrongdoing and in early December. He declined to comment when asked by ABC News' Steve Osunsami about his alleged activities, and Harris denied any knowledge of the illicit scheme.
What ensued was a months-long investigation, spearheaded by the state board of elections and aided by dogged reporting from local media, that culminated in an evidentiary hearing that began on Monday and featured stunning and emotional testimony from the workers involved in Dowless' alleged scheme, Mark Harris' son John, and Harris himself.

A son's testimony and a father's admission
"We believe that the evidence … will show that a coordinated, unlawful and substantially resourced absentee ballot scheme operated during the 2018 general election in Bladen and Robeson counties."
That was how North Carolina Board of Elections executive director Kim Strach kicked off the hearing in Raleigh on Monday that would ultimately result in a brand new congressional election.
After days of testimony from witnesses who said they participated in Dowless' scheme to collect absentee ballots from North Carolina voters, and from Harris' top political strategist who said he was unaware of any illegal activity, an expected witness took the stand — John Harris, Mark Harris' son.
In hours of testimony that featured new e-mail communications between him and his father in April 2017, John Harris told the state board he repeatedly warned his father about abnormalities in vote totals in Bladen County, and said he had heard Dowless was a "shady" character.
"I told him that collecting ballots was a felony, and I would send him the statute that showed that collecting ballots was a felony," John Harris said during his testimony on Wednesday, which culminated in an emotional closing statement that brought his father to tears.
"I love my dad and I love my mom. I certainly have no vendetta against them, no family scores to settle," John Harris told the hearing room. "I think that they made mistakes in this process and they certainly did things differently than I would have done them."
The next day, in equally stunning testimony, Mark Harris testified that he had listened to his son's concerns, but did not consider them a major warning, and decided to hire Dowless anyway.
But following his initial testimony came a dramatic mea culpa from Harris, who revealed he had suffered two strokes in January and still struggles with memory recall.
"Though I thought I was ready to undergo the rigors of this hearing, and I'm getting stronger, I clearly am not. And I struggled this morning with both recall and confusion," Harris said, before telling the board he believes a new election should be called.
"Through the testimony, I've listened to over the past three days, I believe a new election should be called," Harris said. "It has become clear to me that the public's confidence in the 9th District's seat general election has been undermined to an extent that a new election is warranted."
Just hours later, the board voted unanimously to hold a new election in North Carolina's 9th Congressional District.

So what happens next?
Pursuant to the board of election's decision, and a new law passed late last year by the state's Republican-controlled state legislature, a new primary election and general election will be held in the 9th District.
In a statement released Thursday evening, the state board said the timing of those elections will be decided on at a later meeting.
The biggest question now becomes who will run in a new election in a highly-competitive congressional race decided by fewer than 1,000 votes.
McCready, an ex-Marine who raised $6.7 million in his congressional bid last year, has already announced that he will run for the seat again. He is sending out fundraising appeals and again has the backing of the Democratic Congressional Campaign Committee (DCCC).
ABC News has reached out to representatives from Harris' 2018 campaign, but they did not respond when asked if Harris is planning to run again for the seat in the new election.
Pittenger, who represented the suburban Charlotte district in Congress for six years before his loss to Harris, told the Charlotte Observer last year that he will not run for his old seat if a new election was called.
While the district voted for Donald Trump by double digits in 2016, the close results between McCready and Harris in 2018 continues to fuel Democratic hopes to add one more seat to the 40-seat gain they made in taking back the majority in the U.S. House of Representatives last year.
"I look forward to joining with countless others in this special election to do the hard work of repairing the harm Mark Harris, and Republicans in North Carolina, have caused," DCCC Chairwoman and Illinois Congresswoman Cheri Bustos wrote in a statement released Thursday.
Other Republicans are likely to jump into the race as well, but local GOP leaders declined to speculate following Thursday's decision on who those candidates will be, or if Harris will run again.
Copyright © 2019, ABC Radio. All rights reserved.

Ancient dog bone reveals when man’s best friend migrated to North America
Debate rages over whether race had role in police response to Capitol riot
14-year-old girl abducted in North Carolina is found safe in Arkansas: Police
Biden’s push for electric vehicles puts US in international race to electrify
Storms marching across the US with ice, snow and bitter cold to the North
Baby great white shark populations are increasingly moving north on the California coast due to climate change, researchers say