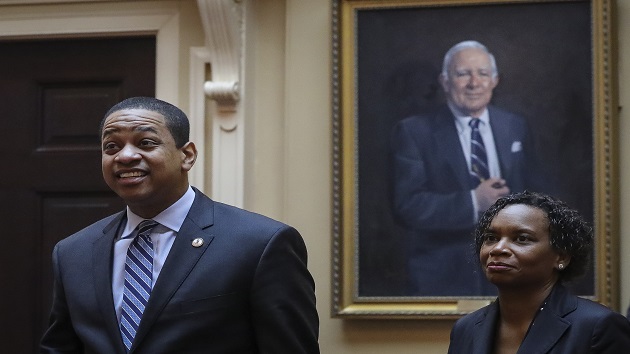 Drew Angerer/Getty Images(RICHMOND, Virginia) — Virginia Lt. Gov. Justin Fairfax dismissed Republican calls for his sexual assault accusers to testify before the state House of Representatives, calling it "political theater."
Fairfax has been accused of sexual assault in the past month by two women, both in the early 2000s, one while he was a college student at Duke University in 2000 and another at the 2004 Democratic National Convention.
"This week, House Republicans voted overwhelmingly against the ERA [Equal Rights Amendment]," a spokesperson for Fairfax said Friday. "Now suddenly the same Republicans want to distract the public from their record of opposition to women’s rights by engaging in political theater.
"The Lt. Governor has consistently denied the unsubstantiated allegations against him and he has consistently requested a full, fair, independent, impartial, and non-political investigation by law enforcement," the spokesperson continued. "Obviously this House Republican led effort is partisan."
Any testimony from either accuser has yet to be scheduled, but House Republican Rob Bell made the invite on Friday for both Dr. Vanessa Tyson, Fairfax's first accuser, and Meredith Watson, Fairfax's admitted college acquaintance, to speak before a committee on live television.
Both women quickly accepted the offer Friday.
"Meredith Watson is gratified that the Virginia General Assembly has announced their intention to hold hearings, and she looks forward to testifying at this forum," Nancy Ericka Smith, Watson's attorney, said in a statement.
"As she has made clear previously, Dr. Vanessa Tyson is prepared to testify at a public hearing regarding Lt. Governor Fairfax's sexual assault of her in 2004," Tyson's lawyers said in a statement. "However, she has not yet received an invitation to do so from members of the Virginia Legislature."
It was just a day earlier Tyson's lawyers had spoken out against the legislature for not taking any action since her accusations.
"It has been two weeks since Dr. Vanessa Tyson came forward with detailed allegations about Lt. Governor Justin Fairfax’s sexual assault of her at the 2004 Democratic National Convention," the lawyers for Tyson said in a statement on Thursday. "Virginia General Assembly has remained silent and has taken no action whatsoever in response to her allegations, even after a second woman, Meredith Watson, came forward to report that Lt. Governor Fairfax raped her while they were students at Duke University in 2000."
Tyson has also called for the Suffolk County District Attorney in Massachusetts, where the alleged assault occurred during the DNC, to investigate her claim.
Virginia House Democrats backed Fairfax, who has said he will not resign.
"Even with the announcement today by Delegate Rob Bell, we lack any details or substantive information on how this meeting would proceed," Virginia House Democrats said in a statement.
Republican House Speaker Kirk Cox said on Thursday any hearing presented would not be an impeachment hearing.
"Chairman Bell announced he will hold a meeting of the Courts of Justice Committee and invite all parties involved," Parker Slaybaugh, communications director for Cox, said Friday.