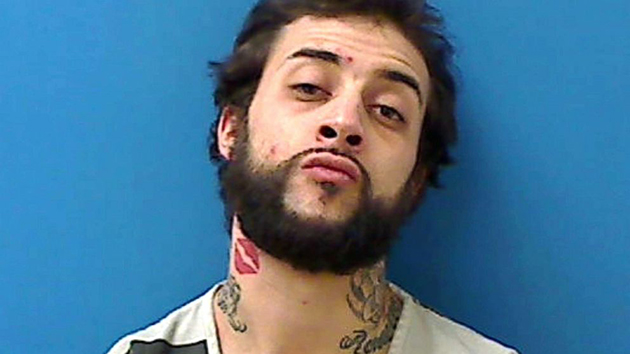 (Catawba County Sheriff's Office) Andrew Moser is pictured in this undated photo released by Catawba County Sheriff's Office. (NEW YORK) — A North Carolina man is facing up to 15 years behind bars for allegedly kidnapping a woman after shooting a man during a heated dispute, police said Saturday.
Derek Andrew Moser turned himself into the Catawba County Sheriff's Office hours after allegedly opening fire on 29-year-old Armando Jimenez and fleeing the scene in a 2006 Buick Rendezvous with 22-year-old Alexa Marie Cruz, police said.
Photographs of Moser and Cruz were released to the media Friday as police carried out a desperate search for them.
"If you encounter Derek Andrew Moser, call 911. Do NOT approach the suspect, he is considered armed and dangerous," according to a press release issued by police.
Though it's unclear what sparked the shooting, police said, Moser, Cruz and Jimenez know each other. Authorities were still investigating the extent of their relationship.
Around 11:45 p.m. on Friday, Moser surrendered and was arraigned for assault with a deadly weapon with intent to kill inflicting serious injury, second-degree kidnapping and larceny of a motor vehicle charges.
Bond was set at $145,000 for Moser, who is currently held in Catawba County Detention Center, police said.
If convicted for the top charge, Moser faces between five and 15 years in prison.
Cruz is safe and cooperating with authorities; Jimenez was treated and released from the hospital, police said.
Police and the Newton Fire Department are also investigating a fire at a neighboring residence to see if it's connected to the shooting.
Copyright © 2019, ABC Radio. All rights reserved.

Asian man stabbed in back in Chinatown, suspect charged with attempted murder as a hate crime
Asian man stabbed in back in New York City’s Chinatown, suspect arrested
Woman who suffered debilitating periods for years gets help with new procedure
Stormy weather pattern on the way for the West and the South
South Dakota attorney general faces call to resign over fatal crash as impeachment proceedings begin
Woman trapped for 10 hours under collapsed backyard awning in frigid weather lucky to be alive