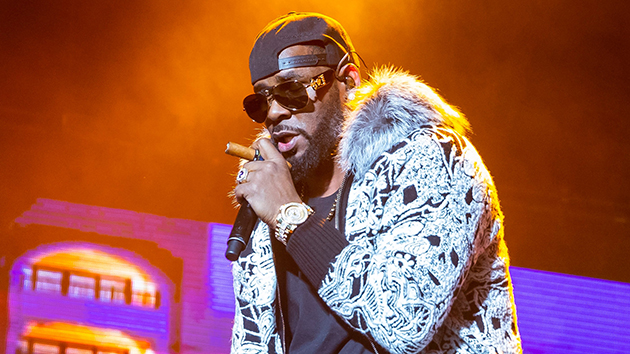 Photo by Scott Legato/Getty Images(CHICAGO) — Singer R. Kelly turned himself in to Chicago police late Friday night after being charged earlier in the day with 10 counts of felony criminal sexual abuse involving four alleged victims, according to the Cook County Prosecutor's Office.
Three of the four victims were younger than 17 at the time of the alleged incidents, according to prosecutors.
At a post-surrender press conference, the pop star's attorney Steve Greenberg dismissed the new charges and called the accusers liars.
Asked whether he thought all the women were making up their allegations, Greenberg said he does.
"I think all the women are lying, yes," he told reporters late Friday night. "This has become, 'Hey, R Kelly — I can say R Kelly did something' — boom. There was a press conference yesterday, 'Oh, these two girls were assaulted by R Kelly!' And the lawyer stood there with a picture of LL Cool J!"
Greenberg went on to claim that Cook County, Illinois, State Attorney Kim Foxx indicted the singer in response to public pressure.
"I had a discussion with the state's attorney’s office earlier this week [and] we were supposed to meet next week and have a discussion about what they had," he said. "I was gonna be allowed to address what they had, then they just decided to indict him today for whatever reason. I suspect this is succumbing to public pressure."
His lawyer also claimed one of the unnamed women in the indictment is the same person in a 2003 child pornography case where the singer was eventually found not guilty in June 2008.
"One of the cases seems to be a rehash he was acquitted for. Double jeopardy should apply to everyone," Greenberg said.
The pop artist remained silent as reporters shouted questions at him when he arrived at a Chicago police station.
Kelly, whose real name is Robert Sylvester Kelly, is also facing investigations from at least three different federal law enforcement agencies including at least one examining his alleged relationships with underage girls and whether they were trafficked, multiple law enforcement sources told ABC News.
Kelly, who is "shell shocked," according to his attorney, is scheduled to appear in bond court Saturday in Chicago, according to the Associated Press. Kelly's attorney said on Twitter that he would be turning himself in on Friday night.
The investigations, by the FBI, Homeland Security Investigations and the IRS, have opened in the six weeks since Lifetime aired “Surviving R. Kelly,” a docuseries about the decades’ worth of misconduct allegations against the singer.
The agencies all declined to comment citing policies of not confirming or denying the existence of investigations.
HSI is looking at potential crimes involving sex trafficking and child exploitation. The existence of the investigations was first reported by The New Yorker.
On Thursday, two more women came forward to say Kelly preyed on them. They appeared in New York with their attorney, Gloria Allred, who said Latresa Scaff and Rochelle Washington planned to speak with federal prosecutors. Allred confirmed in an interview Friday with New York ABC station WABC that her clients had spoken to investigators. A grand jury has also been convened in New York to look into allegations against Kelly.
"Yesterday, I indicated that my two clients who held a press conference here in New York would be speaking to law enforcement, the United States Attorney’s Office for the Eastern District of New York, and they did in fact have that interview," Allred told WABC.
Michael Avenatti, who is representing two alleged victims of Kelly, said he turned over a graphic tape to the Cook County State Attorney's Office in which the singer is allegedly sexually assaulting a 14-year-old.
"Earlier this month we uncovered and recovered a video tape of over 40 minutes in length," Avenatti said at a press conference Friday. "We promptly brought it to the attention of Ms. Foxx and others in her office. This tape leaves no question as to whether R. Kelly is guilty of multiple sexual illegal acts against a 14-year-old girl. The tape was shot in the late '90s, approximately 1999, [and] it depicts two separate scenes shot on two separate days within Mr. Kelly's residence at the time.
"Repeatedly on the video both the victim and Mr. Kelly refer to the victim's age as being 14," Avenatti said. "That occurs in excess of 10 separate times on the video, both the victim and Mr. Kelly can be heard referencing her age."
Kelly's lawyer said he hadn't seen the video, but quickly dismissed the allegation.
"Unfortunately, the state's attorney now succumbed to public pressure, to pressure from grandstanders like Michael Avenatti," Greenberg said.
Kelly’s attorney has previously said his client never intentionally had sex with an underage girl, nor mistreated anyone or held anyone against her will.