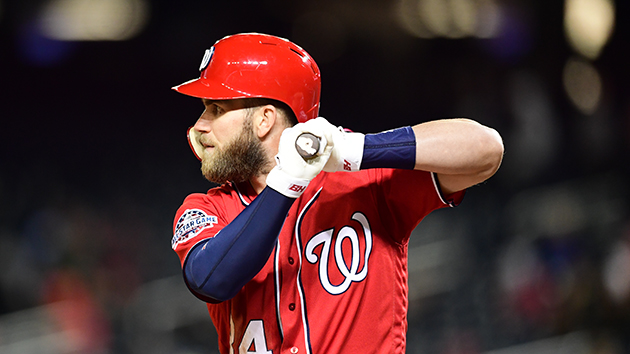 Photo by Scott Clarke / ESPN Images(LAS VEGAS) — Philadelphia Phillies owner John Middleton was in Las Vegas on Friday night to meet with free agent outfielder Bryce Harper, sources told ESPN.
The two sides were not expected to reach a contract agreement during the meeting. But the Phillies have been considered one of the most likely landing spots for the 26-year-old star.
Harper and the Phillies also met in Las Vegas, Harper's hometown, in January.
The Phillies have been active this offseason, trading for infielder Jean Segura and catcher J.T. Realmuto to bolster their lineup. Middleton said early in the offseason that the team was ready to spend money, "and maybe even be a little bit stupid about it."
The team was believed to be interested in both Harper and infielder Manny Machado, but the latter player signed a 10-year contract worth $300 million with the San Diego Padres this week.
Other teams believed to be in the running for Harper include the San Francisco Giants and the Chicago White Sox. The Padres, the Los Angeles Dodgers, and Harper's former team the Washington Nationals are also considered possible landing spots.
Harper is reportedly seeking a deal worth more than the 10 years and $300 million that the Nationals offered him at the end of the 2018 season.
Copyright © 2019, ABC Radio. All rights reserved.