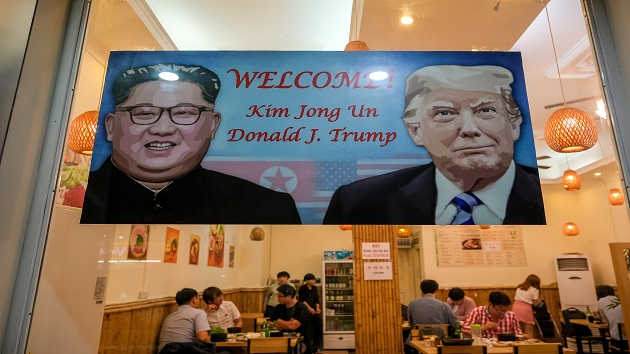 Linh Pham/Getty Images(PYONGYANG, North Korea) — North Korean leader Kim Jong Un began an extended trek to Vietnam Saturday ahead of a second summit with U.S. President Donald Trump in Hanoi.
Trump, who is set to depart the U.S. late Monday for the long flight, will meet with Kim on Feb. 27 and 28. Trump will arrive in the Vietnamese capital on Tuesday morning Eastern time.
Trump will make the nearly 20-hour trip on Air Force One; Kim, meanwhile, will arrive by his preferred method of travel: train.
"It may be difficult for the outside world to comprehend why he would take a train for days instead of a couple hour plane ride," Yuhwan Koh, professor of North Korean Studies at Dongguk University in Seoul, told ABC News. "It's for domestic propaganda."
The trip, from Pyongyang to Hanoi, will take approximately 60 hours. Kim is scheduled to arrive Tuesday.
South Korean media reported that Kim's train was spotted crossing the China border just after 8 a.m. ET.
The North Korean leader is retracing the footsteps of Kim Il Sung, his grandfather and the founder of North Korea, to boost significance to this trip, Koh said. Kim Il Sung visited Vietnam in 1958 by taking a train from Pyongyang to Guangzhou, and then traveling by plane to Hanoi.
"Train diplomacy" has always been North Korea's way of dealing with the outside world and "succession of tradition is important to North Korean people," said Koh.
But the more realistic reason for the choice of train rather than plane is that Kim may have decided it is unsafe to travel on his Soviet-era passenger aircraft, which is not equipped to fly long distances.
He had taken a China Air 747 Boeing, similar to Air Force One, to meet Trump in Singapore last June. China had offered it to Kim with a fighter jet escort from Pyongyang to Singapore.
"It's a matter of national pride. He would be losing face to have to ask China again," Koh explained.
The distance south to the Vietnam-China border is thousands of miles and would take at least two full days, according to analysts. Kim is likely to disembark at the border station of Dong Dang, and then travel 105 miles to Hanoi by car.
Authorities were spotted at the station nearest the Vietnamese border adding security measures on Friday. Traffic on the route to Hanoi will be partially banned until 7 p.m. on Feb. 25 and fully banned from 6 a.m. to 2 p.m. on Feb. 26, according the ruling Communist Party’s Nhan Dan paper.
Copyright © 2019, ABC Radio. All rights reserved.