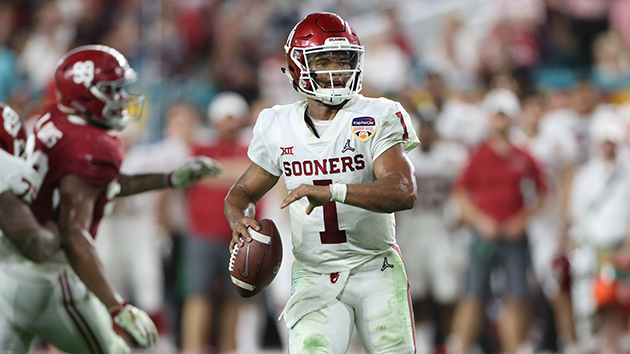 Photo by Allen Kee / ESPN Images(NORMAN, Okla.) — Former Oklahoma Sooners quarterback Kyler Murray is committed to pursuing a career in the NFL over Major League Baseball, he said on Saturday.
Murray was honored during the first half of the Sooners' basketball game against Texas on Saturday.
"For me, it was something I've known for a while," he said about his plans to play football professionally. Murray was drafted by the Oakland Athletics in 2018, but the baseball team allowed him to play one more season of college football.
During that season, Murray won the Heisman Trophy and became a likely first-round NFL Draft pick.
"That organization, being with the A's, was the best possible situation for me," Murray said Saturday. "Just because they were so great throughout the football season, kind of leaving me alone and letting me do my own thing, and at the same time letting me know how much I meant to them and that type of stuff."
Because of that, Murray says, "telling them was tough."
He called the night he was drafted by the Athletics "a great day of my life," but said "I didn't know how the NFL felt about me before this season because I hadn't played."
So he used his junior year at Oklahoma to "put myself in the best position possible. Obviously, when you win, good things happen. A lot of good stuff happened this year."
Copyright © 2019, ABC Radio. All rights reserved.