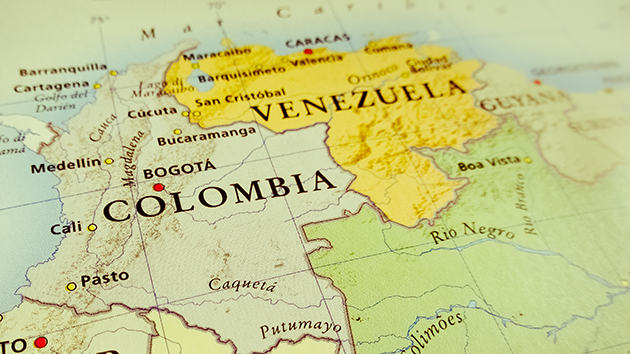 LorenzoT81/iStock(CARACAS) — As peaceful aid workers started up trucks that would carry humanitarian aid across Venezuela's borders with Brazil and Colombia on Saturday, thousands of Venezuelans in need of food and medical supplies took to the streets to pressure the military to allow the much-needed aid into the country.
The confrontations, most of which have occurred on the Venezuelan side of the borders, turned violent in many instances, threatening to further embroil the country into chaos.
On the Simon Bolivar International Bridge, which crosses into the country from Colombia, Venezuelan authorities unleashed tear gas to disperse crowds, who had begun forming human chains in an effort to cross the aid on their own.

Venezuelans knocked down barricades and threw them into the river from the Bolivar bridge. In a separate incident there, three defecting members of the Venezuelan National Guard drove their armored vehicle over the bridge in an apparent attempt to escape the country.
Other military personnel defecting from Venezuela also crossed the bridges into Colombia throughout the day.
In all, at least 23 members of the Venezuelan Armed Forces fled to Colombia, according to that country's migration agency.
Two trucks carrying humanitarian vehicles were burned on the bridge, according to the migration agency.

Venezuela has become an international flashpoint since January, when the United States and 50 other countries recognized Juan Guaido, the leader of the country's opposition party, as its interim president. Led by President Donald Trump, the collection of countries has called on Venezuela's president, Nicolas Maduro, to resign.
On Saturday, President Donald Trump tweeted, “God Bless the people of Venezuela!”
The latest point of contention between the two sides has been the entry of humanitarian aid into Venezuela — Guaido and his supporters pushing to allowing it in, while Maduro and his security forces resisting the help from the U.S. and other countries.
Tons of food and medical supplies, such as medication, wheelchairs, crutches and bandages, have been stockpiled on the Colombian and Brazilian sides of the Venezuela border for weeks, awaiting safe passage into the country, including more than 200 tons in Cucuta, Colombia, alone.
For just as long, Maduro had ordered military personnel to block access into Venezuela and placed containers on the bridge to block the trucks from passing over. On Thursday, Maduro ordered the border crossings closed and blasted the U.S. for using aid to undermine him.
On the Simon Bolivar, Urena and Tienditas bridges, confrontations have continued since early Saturday. In some cases, both the military and Venezuelan citizens have thrown rocks.
Amid the violence, some of the aid is finding its way across the various border crossings into Venezuela. Guaido said the first shipment of aid had passed through Venezuela's border with Brazil.
A couple hours later, he announced that the trucks carrying aid from Colombia had also crossed the Venezuelan border, but said Maduro’s “regime” was impeding its passage.
Meanwhile, Maduro called on Venezuelans to "defend our independence."
"Here, peace will triumph," he wrote in Spanish in a tweet.
Maduro also called Colombian President Ivan Duque “the devil” in a speech Saturday morning and announced that he was breaking off diplomatic ties with that country. He gave Colombian diplomats 24 hours to leave Venezuela.
Copyright © 2019, ABC Radio. All rights reserved.