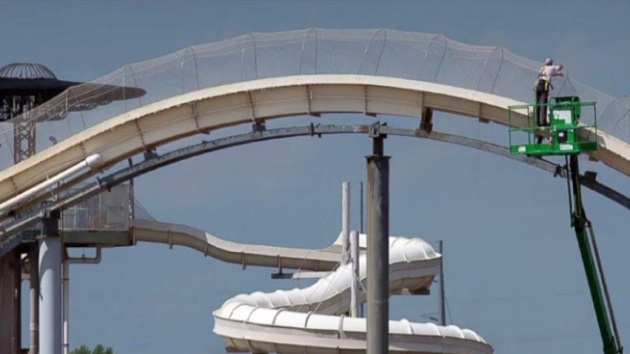 ABC News(KANSAS CITY, Kansas) — The owner and designer of what was billed as the world's tallest waterslide have had all charges against them dropped on Friday in relation to the horrific death of a 10-year-old boy on the ride in 2016.
Schlitterbahn Water Park owner Jeff Henry and designer John Schooley had been charged with second-degree murder after Caleb Schwab was decapitated on the Kansas City, Kansas, ride called the Verrückt.
Operations manager Tyler Miles, who was charged with involuntary manslaughter, also had his charges dropped on Friday.
The defendants issued a motion to dismiss the charges over what they called "improper evidence and testimony displayed to the grand jury."
The water park company, which has since closed its Kansas City location, hailed the decision to dismiss charges in a statement.
"We welcome today’s decision which dismissed the charges against all defendents (sic)," said Winter Prosapio, corporate director of communications for Schlitterbahn Waterparks and Resorts. "We are thankful for all the support and encouragement we’ve received."
The grand jury had returned an indictment against Henry, Schooley and Miles on March 21, 2018, in Wyandotte County, Kansas. But on Friday, the judge dismissed those charges saying the jury was shown "a highly dramatized" made-for-TV drama produced by the Travel Channel.
The defendants lawyers also argued an expert who testified before the grand jury about American Society of Testing and Materials (ASTM) standards, even though they weren't required by law at the time of the development of the slide. An expert also discussed the death of someone at a different Schlitterbahn Water Park, but that was an employee who was killed while performing maintenance.
"The Court holds that the three areas of grand jury abuse cited by the defendants are credible and persuasive and must be considered illegal evidence that should not have been presented to the grand jury," Judge Robert P. Burns wrote.
The motion does say the state could still file a criminal complaint or take evidence before a different grand jury.
Prosecutors have alleged that Henry and other employees of the water park attempted to hide from investigators documents detailing at least 13 injuries on the Verrückt waterslide leading up to Schwab's death.
"We are obviously disappointed and respectfully disagree with the court’s decision. We will review the ruling carefully, including the court’s observation that the ruling ‘does not preclude the possibility that the State could continue to pursue this matter in a criminal court,' and take a fresh look at the evidence and applicable law in this tragic and troubling case to determine the best course forward," Kansas Attorney General Derek Schmidt said in a statement released Friday.
Caleb Schwab's parents, Michelle and Scott, who was a state representative at the time and is now Kansas's secretary of state, spoke to "Good Morning America" about the accident in 2017.
Caleb's brother Nathan was waiting at the bottom of the slide while his parents were tending to the family's other children.
Michelle heard Nathan screaming, 'He flew from the Verruckt, he flew from the Verruckt,'" Michelle Schwab recalled to "GMA."
Investigators said Caleb was somehow decapitated on the ride.
"There was a gentleman who wouldn't allow me to come close enough to see what was going on, and he just kept saying, 'Trust me, you don't want to go any further,'" Michele Schwab said. "I kind of knew in my mind that I shouldn't see it, that I probably don't want to see it."