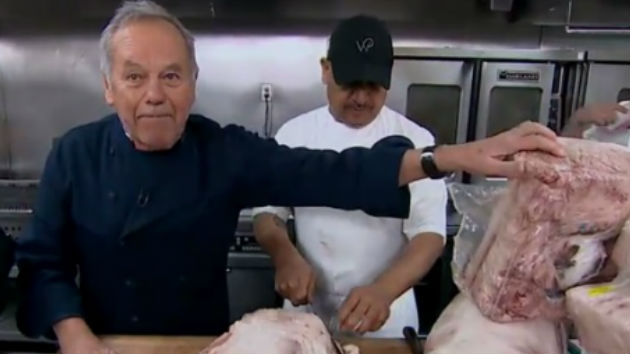 ABC(LOS ANGELES) — As sure as a winner will forget to thank their significant other on the podium, celebrity chef Wolfgang Puck will be running the kitchen for the famed Governors Ball after the Oscars Sunday night.

It's the 25th year that Puck's been crafting A-list edibles for A-list guests at the official after-party of the Academy Awards, and once again, he caught up with ABC Radio to talk about the most indulgent items on the menu this year.

"We all know black truffles are expensive, we have 30 pounds of that," he explains. "You know, caviar is not cheap, either. We brought in enough Miyazaki beef, and you know, that's expensive. It cost as much as a Mercedes with all the beef we got."

Puck also explained some of his inspiration for one of Sunday night's delicacies, Spanish ham, came from a Best Picture nominee — accidentally.

"The inspiration for the ham started really when I saw Roma, the movie, where they spoke Spanish. And I was thinking right away of Spain," Punk explains. "But then afterwards, I found out that [director Alfonso Cuaron] is from Mexico and it's actually a Mexican movie!"

Tune in to ABC on Sunday night to see the nominees and winners at the Academy Awards — before they descend on the Governors Ball and start stuffing their faces.