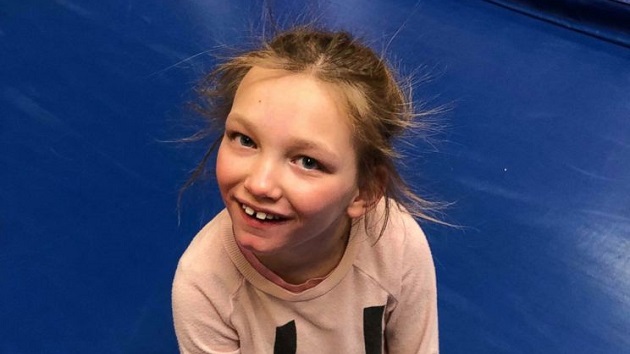 Tamra Logan/speciallivingtoday(NEW YORK) — One of the first moments in which a girl with cerebral palsy walks on her own was captured on video, which shows the 10-year-old in pure joy.

Birkley, 11, has cerebral palsy and is nearly deaf, but her mom, Tamra Logan, told ABC News' Good Morning America that she is a "super happy kiddo" who is "cuddly" and "loves activity."
Birkley has spent most of her life crawling or walking on her knees in special "knee sneakers" created by her mom, but she has been taking physical therapy for years in hopes of one day being able to walk on her feet by herself.
Last October, Logan said Birkley began to take her first steps. A week after her first few steps, Birkley summoned the strength to walk on her feet. Her mom captured the special moment on video, showing Birkley walking independently for nearly a minute, the "longest distance she ever walked," Logan said.
"She was super excited, she was just surprised at herself, at what she was doing," Logan said of the video. "I think you could tell."
The video of Birkley's steps has since gone viral, something Logan said they never expected. The pair has received messages of support from all over, she added.
"I just had people reaching out from every which way, so excited, everyone was crying, just a lot of amazing comments, it was the best month ever," she said.
"It was just personal," she added. "We did not expect this at all."
Since the video was taken on Oct. 28, 2018, Birkley is still getting stronger and walking longer distances every day, her mom added. She said you can follow more of Birkley's journey on her blog, "Special Living Today."