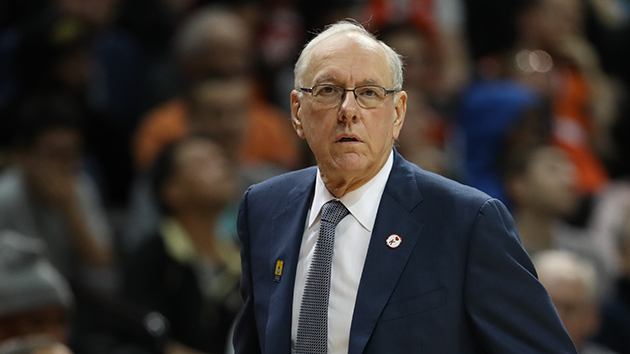 Photo by Allen Kee / ESPN Images(SYRACUSE, N.Y.) — Syracuse head basketball coach Jim Boeheim will return to the sideline on Saturday for his team's game against Duke, three days after he was involved in a fatal traffic accident.
University athletic director John Wildhack announced the news Friday.
"The Jimenez family has suffered a tremendous loss," he wrote. "Our community is shaken. The Boeheim family is heartbroken over what happened, as we all are."
Wildhack explained that "Coach Boeheim's players gain strength from him, just as he gains strength from his players. Our entire community gains strength from each other. With this in mind, and after thoughtful considerations, I have respectfully decided that Coach Boeheim will resume his coaching duties later today and will coach in tomorrow night's game against Duke."
Boeheim met with the team on Thursday, but did not participate in the team's practice session.
Following the team's Wednesday night win over Louisville, Boeheim was driving home from a restaurant when he struck and killed a man walking along an interstate highway. Accident reports say Boeheim was trying to avoid hitting a disabled vehicle that had lost control and hit a guardrail. Jorge Jimenez, 51, was a passenger in that vehicle.
Sobriety tests for Boeheim and the driver of the second vehicle were negative.
Copyright © 2019, ABC Radio. All rights reserved.