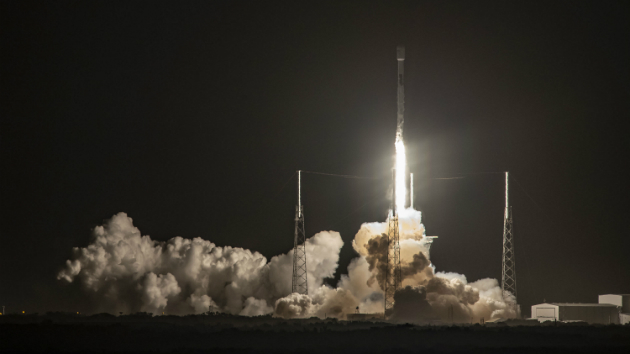 SpaceX(CAPE CANAVERAL, Fla.) — Israel's Beresheet robot took off on a historic moon mission, with the help of SpaceX, on Thursday night.
SpaceIL and the state-owned Israel Aerospace Industries launched the unmanned spacecraft from Florida's Cape Canaveral Air Force Station at around 9 p.m. using a SpaceX Falcon rocket.
The Beresheet robot, which is about the size of a washing machine, will begin its mission with a ride around Earth's orbit on a SpaceX Falcon 9 rocket. It's scheduled to touch down on the moon's surface in about two months.
It's a milestone mission for the country's space agency as only the U.S., Russia and China have previously managed soft landings on the moon.
"By what we’re doing and achieving with the limited resources that we have, and the limited finances we had – I think we showed the Israeli ingenuity," SpaceIL chairman Morris Kahn, one of the mission's largest donors, told reporters on Monday. "We show our initiative, and we’ve developed technology, which I think is going to be important. I think we gotta take Israel into space."
It's the world’s first privately-funded lunar mission, according to SpaceIL, the organization backing the mission.
SpaceIL said it would document the entire two-month space journey in real-time on it's Facebook page.
"History in the making – and it’s live," the organization said. "Israel is aiming for the moon and you’re all invited to watch our live stream from the Israeli Aerospace Industries center in Yehud. After the launch, our crew will take control of Beresheet and begin the journey to the moon!"