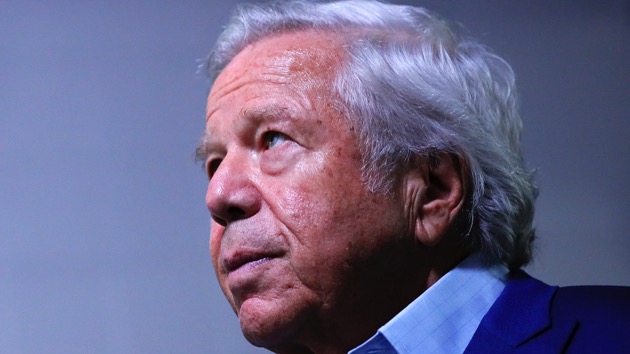 Kevin C. Cox/Getty Images(JUPITER, Fla.) — New England Patriots owner Robert Kraft has been charged with solicitation of prostitution in connection to a wide-ranging human trafficking investigation at a Florida massage parlor, police in Florida said at a news conference Friday morning.
Kraft, who was one of 25 people charged in the sting, faces two counts of soliciting another to commit prostitution for acts that allegedly occurred about one month ago, Jupiter Police Chief Daniel Kerr said.
Authorities, who set up hidden cameras at the day spa, said there's video evidence of all of all of the suspects, including Kraft, participating in the alleged acts, said Jupiter Police Detective Andrew Sharp.
"Much of our evidence comes from the businesses, also from body-worn cameras of our officers, and also surveillance that we had been conducting over the last several months," authorities said at the news conference.
Stacey James, a spokesman for Kraft, said in a statement, "We categorically deny that Mr. Kraft engaged in any illegal activity. Because it is a judicial matter, we will not be commenting further."
ABC News has reached out to the NFL for comment but has not immediately heard back.
The charges against Kraft are misdemeanors, said Sharp.
The NFL team owner is not a Florida resident "so there would be an arrest warrant issued," Kerr said.

The NFL said in a statement that the league "is aware of the ongoing law enforcement matter and will continue to monitor developments.”

The charges come three weeks after the Patriots beat the Los Angeles Rams to win the team's sixth Super Bowl title.
This year marks the 25th anniversary of Kraft's then-NFL record $175 million purchase of the Patriots in 1994. At the time he vowed to turn the team into a league champion.

This story is developing. Please check back for more updates.
Copyright © 2019, ABC Radio. All rights reserved.