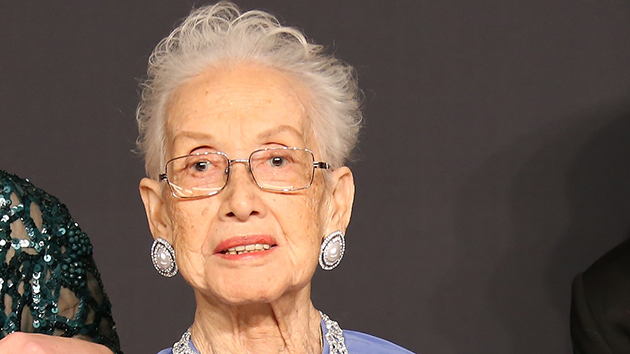 Photo by Dan MacMedan/Getty Images(NEW YORK) — Katherine Johnson, the "human computer" whose work was depicted in the 2016 film Hidden Figures, was recognized on Friday as the agency renamed a building after the pioneer.
The National Aeronautics and Space Administration redesignated a building that houses programs essential to safety on space missions in the 100-year old mathematician's native West Virginia as the Katherine Johnson Independent Verification and Validation (IV&V) Facility.
“I am thrilled we are honoring Katherine Johnson in this way as she is a true American icon who overcame incredible obstacles and inspired so many,” NASA Administrator Jim Bridenstine said in a statement. “It’s a fitting tribute to name the facility that carries on her legacy of mission-critical computations in her honor.”
The building aptly houses programs that support NASA’s highest-profile missions "by assuring that mission software performs correctly," according to an agency statement.
In her three decades at NASA and its predecessor agency, the National Advisory Committee for Aeronautics, Johnson calculated trajectories for space missions including Alan Shepard’s Freedom 7 mission in 1961, John Glenn’s Friendship 7 mission in 1962 and several Apollo missions.
As a black woman, Johnson and fellow black mathematicians Dorothy Vaughan and Mary Jackson shattered racial and gender barriers and stereotypes during the height of the Civil Rights Era. Their story was documented in the 2016 film Hidden Figures, which was based on the book by Margot Lee Shetterly. Johnson was portrayed by Taraji P. Henson.
In 2015, Johnson received the Presidential Medal of Freedom. In 2017, NASA honored her with its dedication of the Katherine Johnson Computational Research Facility in Hampton, Virginia.
Copyright © 2019, ABC Radio. All rights reserved.