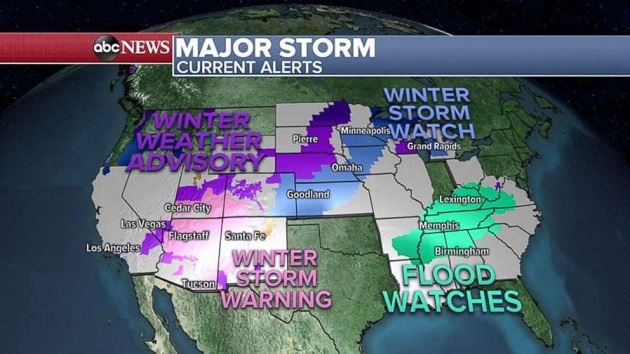 ABC News(NEW YORK) — As Las Vegas and Los Angeles area residents enjoy rare snow days, a storm is on the move, targeting the Northeast and South for the weekend.
Snowfall struck the Las Vegas Strip on Thursday — the most snow the city has seen in more than a decade. Las Vegas schools are closed Friday, giving residents a rare snow day.
Flagstaff, Ariz., had its snowiest day in the city's history with 35.9 inches.
Even the Los Angeles area reported snow showers.
With the storm on the move, here's the latest forecast:
The storm is centered over the Southwest Friday morning, bringing rain and snow to Arizona, New Mexico, Utah and Colorado.
By Friday night the storm will move into the eastern Rockies bringing snow to Denver.
At the same time, a frontal system ahead of the storm will bring heavy rain to the South, from Arkansas to Tennessee.
The storm will move east on Saturday, bringing heavy snow from Kansas to Michigan.
In the South, severe storms are forecast to bring heavy rain, damaging winds, large hail and even a few tornadoes. Flash flooding is also a threat.
From Saturday night into Sunday morning the storm will barrel into the Northeast, bringing heavy rain to the Interstate 95 corridor from Virginia to Massachusetts. Heavy snow is expected for northern New England.
But the heaviest rain will fall from Shreveport, Louisiana, to Memphis, Tennessee, and into western Virginia. Four inches or more of rain is possible and flash flooding is expected.