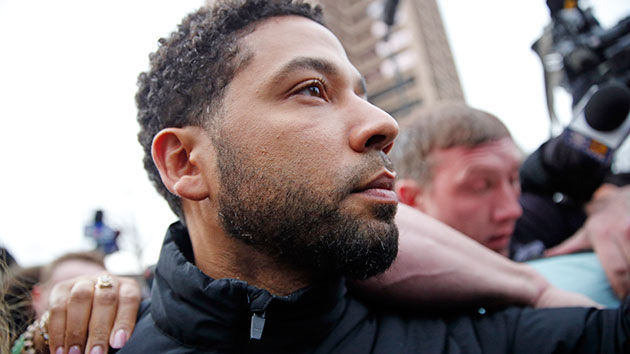 Nuccio DiNuzzo/Getty Images(CHICAGO) — Jussie Smollett's legal team apparently isn't happy with the way his case has been handled by investigators.

“Today we witnessed an organized law enforcement spectacle that has no place in the American legal system," declares a statement issued by his attorneys Thursday afternoon, hours after Smollett was arrested and formally charged in Chicago for allegedly faking a hate crime against him last month.

The statement goes on: "The presumption of innocence, a bedrock in the search for justice, was trampled upon at the expense of Mr. Smollett and notably, on the eve of a mayoral election. Mr. Smollett is a young man of impeccable character and integrity who fiercely and solemnly maintains his innocence and feels betrayed by a system that apparently wants to skip due process and proceed directly to sentencing.”

After Smollett's arraignment, Chicago Police Superintendent Eddie T. Johnson held a press conference in which he criticized Smollett, saying in part, "Why would anyone, especially an African-American man, use the symbolism of a noose to make false accusations? … How can an individual who’s been embraced by the city of Chicago turn around and slap everyone in the city in the face with these false claims?" He further called the accusations "a scar" that "Chicago…didn't earn."

The Empire star was arraigned on a class-four felony charge disorderly conduct/filing a false police report Thursday and released on $100,000 bond. During his court appearance, Smollett maintained his innocence, denying he staged the anti-gay attack January 29, supposedly at the hands of "racist" supporters of President Trump. Investigators say Smollett staged the attack to boost his profile, and his pay on Empire.

Speaking of Empire, Smollett returned to the Chicago set of the Fox drama after his court appearance Thursday. While Fox has issued statements in support of Smollett in the wake of the initial attack reports, their most recent statement declares, “We understand the seriousness of this matter and we respect the legal process. We are evaluating the situation and we are considering our options.”

TNT didn't need much time to decide to postpone airing an already recorded episode of Drop the Mic featuring Smollett, saying in a statement to ABC News that they're "pulling the episode in the interest of not being exploitative of an incredibly sensitive situation. We are holding on airing his episode for now and we are replacing it with the Raven Simon vsRon Funches and Joey McIntyre vs Joey Fatone episode.”