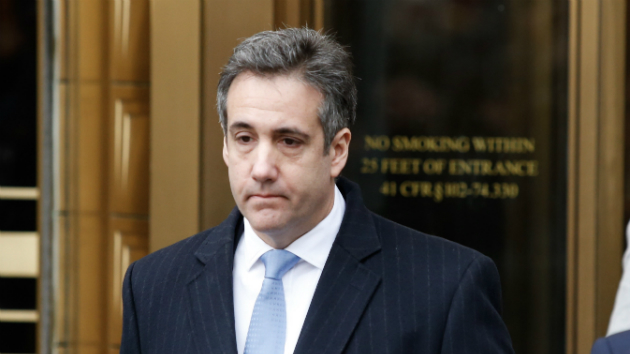 Eduardo Munoz Alvarez/Getty Images(WASHINGTON) — An Internal Revenue Service agent was charged on Thursday in connection with the leaking of overseas financial transactions tied to President Donald Trump's former attorney Michael Cohen, according to the Department of Justice.
John Fry, an analyst in the San Francisco office of the IRS, was charged with unlawful disclosure of suspicious activity reports, according to a news release from the U.S. Attorney's Office in the Northern District of California.
Banks are required to file suspicious activity reports for any suspicious financial transactions. The criminal complaint, which was filed under seal on Feb. 4, was released by the Department of Justice Thursday.
The criminal complaint alleged that Fry logged onto his work computer and searched Cohen's name in a specific government database, found many of Cohen's financial records and then ultimately went back a second time and did a second search for Cohen.
After accessing the documents, Fry allegedly called Michael Avenatti, the attorney who represents actress Stormy Daniels, "for more than 6 minutes," according to the complaint. Avenatti then allegedly "used his public Twitter account to circulate a dossier releasing confidential banking information related to Cohen and his company, Essential Consultants," the complaint stated.
In addition to Avenatti, the information was allegedly shared with reporters from the Washington Post and New Yorker magazine, according to the DOJ.
The complaint indicated that Cohen's financial records showed "possible fraudulent and illegal financial transactions by Michael Cohen."
In November, Cohen pleaded guilty to lying to Congress about a Moscow real estate project that Trump and his company pursued at the same time he was securing the Republican nomination in 2016.
Cohen is set to report to prison in May.
Fry appeared in court Thursday and was released on $50,000 bond. He did not enter a plea. His next hearing is scheduled for March 13. It's unclear whether he's retained an attorney.
Fry, who faces up to five years in prison if convicted, is not the first Treasury employee to be charged in connection with allegedly leaking "highly sensitive information" about suspects in the high-profile investigation into Russia's meddling in the 2016 presidential election.
Natalie Mayflower Sours Edwards, a senior adviser at the Treasury Department, allegedly "betrayed her position of trust” by leaking confidential banking reports on the Russian Embassy and suspects charged in special counsel Robert Muller's Russian collusion probe, the government said in a statement.
She pleaded not guilty in January.
Copyright © 2019, ABC Radio. All rights reserved.