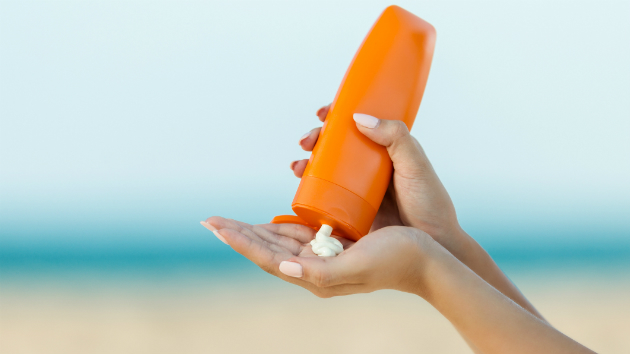 bymuratdeniz/iStock(WASHINGTON) — The U.S. Food and Drug Administration is working on a rule that could change the way consumers think about which ingredients in sunscreen are considered safe, saying they believe now that mineral sunscreens are safe but products that use chemicals need more research.
The FDA announced Thursday that it has proposed a rule to declare mineral sunscreen ingredients as safe, specifically zinc oxide and titanium dioxide. The agency said 12 other chemicals commonly used in sunscreens need more research to determine if they can be officially listed as safe, including oxybenzone and octinoxate.
Two other chemicals will be declared unsafe, but an FDA spokeswoman said those two aren't used anymore in the U.S.
An agency spokesperson emphasized that the FDA is not concluding the 12 common chemical ingredients are unsafe, but that they need more information to decide. Products with those ingredients will still be available while the FDA works with the manufacturers to answer their questions.
The Environmental Working Group, an outspoken advocacy group that works to eliminate dangerous chemicals in products, says the rule is a "major win for public health," and pursues changes they've been pushing since they started looking at sunscreen 10 years ago. The group only recommends mineral sunscreens because they say chemicals used in sunscreen can be absorbed into the skin and disrupt hormones, or be inhaled when people use spray sunscreen.
"The biggest takeaway from this for us, what is so gratifying, is finally we're seeing an indication that 14 of the 16 ingredients in sunscreens need further study or are not considered as safe," said Nneke Leiba, director of EWG's healthy living science program.
Leiba said the FDA proposal would put U.S. regulations more in line with European rules about sunscreen, which she said wouldn't allow 90 percent of the products available in the U.S.
Consumers would see several other changes when they go to buy sunscreen if the rule is finalized, including active ingredients listed on the front of sunscreen bottles and alerts on skin cancer, aging and sun exposure on packaging, specifically for products that have not been shown to help prevent skin cancer.
Products that combine sunscreen and insect repellent would also be listed as unsafe and all sunscreens above 15 SPF would have to include protection against both kinds of UV radiation, called broad spectrum protection.
The FDA emphasized in the announcement that consumers should continue to use sunscreen and protect themselves from the sun as the agency considers more rules.
The FDA's rule will be posted for public comment next week.
As for other sunscreens, it could take months or even years to determine if any chemical ingredients will be listed as unsafe. If the FDA isn't satisfied with the information on those ingredients by the end of the process, the products could have to be reformulated or could be pulled from the market.
Copyright © 2019, ABC Radio. All rights reserved.