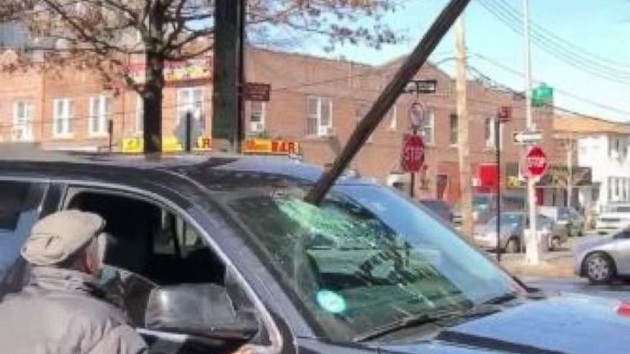 WABC-TV(NEW YORK) — An Uber driver in Queens was the luckiest guy in New York City on Thursday.
Mahboob Lodhi, who said he had just gotten off a shift working for the car-share company, was cruising through Woodside in the city's largest borough when a large plank fell from elevated subway tracks above him and speared right through his windshield.
Lodhi missed disaster by a foot or two.
"Boom. I'm just shocked," Lodhi told New York ABC station WABC-TV about his thoughts in the moment. "I'm nervous and then after a couple minutes, nothing."
No one was injured in the vehicle or on the street, though the wooden plank did glance off Lodhi's arm and glass sprayed onto him.
Photos from after the incident show the piece of wood fully punctured the windshield and reached all the way to the passenger seat.
Several other planks also fell to the street.
"A track from the 7 train just crashed down upon a driving car around 65th Street in Woodside, piercing through the windshield," New York City Councilman Jimmy Van Bramer tweeted. "These photos are horrifying!"
Van Bramer also called for an investigation and said "someone could have been killed."
The Metropolitan Transit Authority, which operates New York City's subways, is facing billions of dollars in debt. The agency's total outstanding debt as of Jan. 14 was slightly over $40 billion.
About Thursday's incident, the MTA said in a statement to WABC, "We take this incident extremely seriously, are conducting a full investigation into what happened, have personnel ensuring the rest of the area is safe, and are relieved that no one was injured."
Workers also spent Thursday evening inspecting the elevated portion of the 7 line for any other possible similarities.
Copyright © 2019, ABC Radio. All rights reserved.