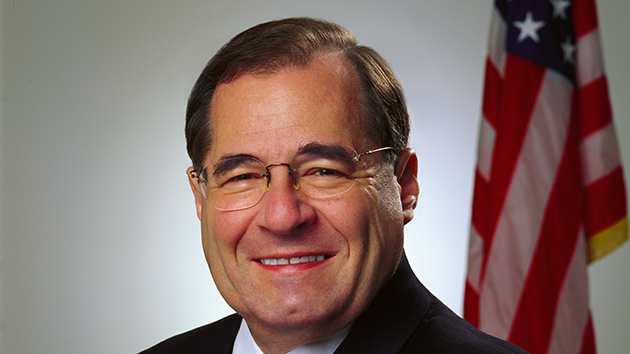 US Congress (Office of Jerry Nadler, D-NY)(WASHINGTON) — The chairman of the House Judiciary Committee wrote to Attorney General William Barr Friday to demand access to the full scope of records and evidence gathered by special counsel Robert Mueller during the investigation into Russian meddling in the 2016 campaign.
The letter is an attempt to lay the foundation for Democrats to ensure they can obtain the report and the underlying materials from the Mueller probe amid concerns about the records’ full release.
There is, wrote Chairman Jerrold Nadler, a New York Democrat, “a significant public interest in the full disclosure of information learned by the Special Counsel about the nature and scope of the Russian government’s efforts to undermine our democracy.”
His letter is co-signed by a handful of Democrats leading other committees investigating the president or his administration, including House Intelligence Committee Chairman Adam Schiff, House Oversight Committee Chairman Elijah Cummings, House Financial Services Committee Chair Maxine Waters, and House Foreign Affairs Committee Chairman Eliot Engel. Nadler's committee would oversee any impeachment investigation should Democrats decide to pursue that course.
Nadler’s letter requests not only copies of Mueller’s full report — whenever his investigation has concluded — but also that the Department of Justice provide copies with material they believe may “not suitable for immediate public release.” This would include any classified documents or records that may be withheld from the public because of the department’s policy against discussing evidence in cases where the target of an investigation is not charged.
“This expectation is well-grounded in the precedent set by the Department in recent years,” Nadler wrote. “In other closed and pending high-profile cases alleging wrongdoing by public officials, both the Department and the FBI have produced substantial amounts of investigative material, including classified and law enforcement sensitive information, to the House of Representatives.”
Nadler specifically focuses on the concerns that the Barr will withhold any material that could be viewed as evidence of wrongdoing by President Donald Trump, based on his comments during his Senate Judiciary Committee confirmation hearing. During the hearing, Barr said he would determine what from Mueller's confidential report would be transmitted to congressional leaders.
"My goal and intent is to get as much information out as I can consistent with the regulations," he said, frustrating Democrats who wanted him to commit to releasing the full report.
“Where judgments are to be made by me, I will make those judgments based solely on the law and Department policy and will let no personal, political, or other improper interests influence my decision,” Barr said, noting that Congress “can and does conduct its own investigations, and its right to do so is not precluded by the [DOJ’s] decision not to provide certain information about an uncharged individual gathered during the course of a criminal investigation."
Barr has suggested he may follow department protocol that do not permit indictments against sitting presidents. The argument favoring the release of records to Congress has been the subject of several published reports in recent days by legal experts.
A congressional demand to access records from the special counsel’s probe relies on precedent set during the Watergate investigation into President Richard M. Nixon.
Nadler “should consider taking a page from his predecessor’s book and formally request a referral of possible impeachment material,” Benjamin Wittes, who is a senior fellow in Governance Studies at The Brookings Institution, wrote in a column, in the online legal publication Lawfare.
Neal Katyal, who served as solicitor general under President Barack Obama, also cited those actions in an opinion column in the New York Times this week raising the question of Congress’s responsibility to intervene if the Justice Department finds evidence of wrongdoing.
“If Mr. Mueller writes a report that is anything less than a full clearing of the president: Congress would be under a constitutional obligation to investigate the facts for itself,” he wrote.
Nadler’s letter tackled that issue head-on.
“Because the Department has taken the position that a sitting President is immune from indictment and prosecution, Congress could be the only institution currently situated to act on evidence of the President’s misconduct,” he wrote. “To maintain that a sitting president cannot be indicted, and then to withhold evidence of wrongdoing from Congress because the President will not be charged, is to convert Department policy into the means for a cover-up. The President is not above the law.”
Nadler’s request extends beyond the requirements spelled out in the current special counsel regulation. Under those guidelines, Mueller is required to provide the attorney general with a “confidential report explaining the prosecution or declination decisions reached by the Special Counsel,” but it will be up to the attorney general whether to release that report to Congress and the public.
The attorney general is also required to notify key congressional leaders – the chairs and ranking members of the House and Senate Judiciary Committees – when Mueller's investigation is finished, along with a "description and explanation" of any instances where a proposed action by Mueller was "so inappropriate or unwarranted" that it was not pursued.
President Trump and the White House have said the decision will be up to Barr.