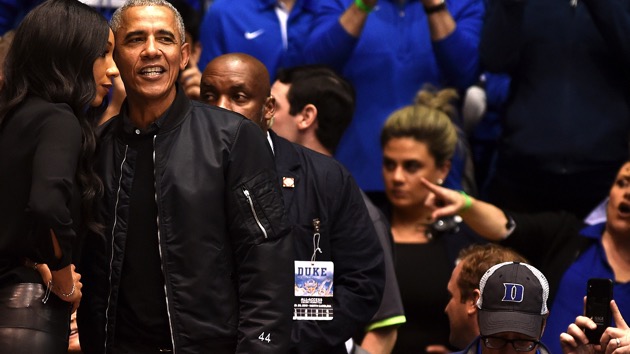 Lance King/Getty Images(NEW YORK) — Barack Obama sat courtside at the Duke-UNC game this week. But although the matchup is one of the most-anticipated college basketball games of the year, it was Obama's bomber jacket that stole the show.
The former POTUS traded the traditional suit and tie from his presidential days for a relaxed all-black outfit in which a customized bomber jacket from designer Rag & Bone, embroidered with "44" on the left sleeve, was the main focus.
The 44th president's stylish look instantly became a trending topic on social media, with some renaming Obama's jacket the "O-bomber."
"No president ever dripped harder than him," one person commented on Twitter.

no president ever dripped harder than him.

A host of other tweets were shared on Twitter all in the name of Obama's head-turning topper.

If you want to copy Obama's cool dad look, be prepared to drop $595; the jacket is currently available for pre-order on Rag & Bone's website.
Copyright © 2019, ABC Radio. All rights reserved.