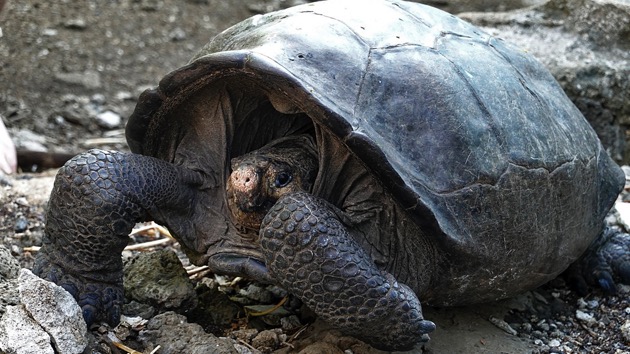 RODRIGO BUENDIA/AFP/Getty Images(FAIRFAX, Va.) — A species of tortoise thought by scientists to be extinct for more than 100 years were actually hiding in plain sight on a remote Galapagos island.
The Galapagos Conservancy, a Fairfax, Virginia-based organization dedicated to the long-term protection of the Galapagos Islands, wrote on Twitter Wednesday that one of its employees had just returned from Fernandina Island, where he spotted a female adult Chelonoidis phantasticus, describing the discovery as a "monumental finding."

BREAKING NEWS! GC’s own @wacho_tapia just returned from Fernandina Island in #Galapagos, where they discovered a female #tortoise. Tortoises on Fernandina have been thought to be extinct for over 100 years, so this is a monumental finding! Photos © GNPD, W. Tapia pic.twitter.com/fhQpIzsHmM

Before the female was found, the species of tortoise was believed to have been "lost" for 112 years, according to The Search for Lost Species. The tortoise has only ever been found on Fernandina Island, the "youngest and least-explored of the Galapagos Islands," according to the organization.
But, the website alluded to the chance that the species may be "holding on," citing tortoise droppings that were found during an expedition in 1964 and a fly-over of the island in 2009, where people on board "reported sightings of something tortoise-like from the air."
Experts believe more species may be on the island due to findings of tracks and scat.
Copyright © 2019, ABC Radio. All rights reserved.