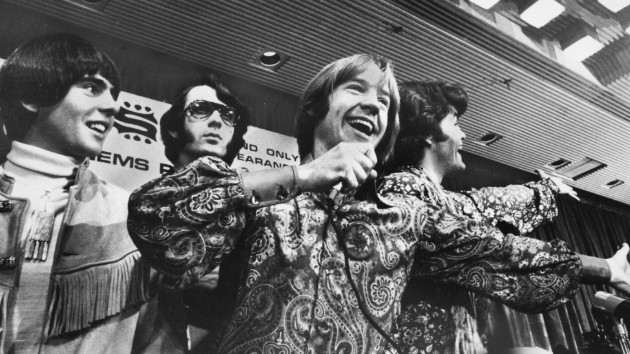 (The Monkees, Peter Tork foreground) Mike McLaren/Central Press/Getty Images(LOS ANGELES) — Peter Tork of The Monkees has died at the age of 77, according to a post on the musician's official Facebook page.

"It is with beyond-heavy and broken hearts that we share the devastating news that our friend, mentor, teacher, and amazing soul, Peter Tork, has passed from this world," the note reads. A spokesperson for The Monkees' record label, Rhino, confirmed Tork's death.

Born Peter Thorkelson in Washington, D.C., Tork began playing music in the New York City folk scene during the early 1960s after dropping out of college. In 1965 he moved to Los Angeles, where, at the urging of his friend Stephen Stills, he tried out for a role in a new comedy TV show about a fictional band inspired by The Beatles.

Peter was hired to star in The Monkees alongside Davy Jones, Micky Dolenz and Michael Nesmith, and the show became a huge success, as did the music the group recorded with the help of seasoned professional songwriters and session musicians.

Known as the "Prefab Four," The Monkees sold millions of albums thanks to the hit TV series, which ran through 1968 and won two Emmys. Tork played bass in the band, and contributed a few songs and occasional lead vocals to the group. Among the songs he's featured on are "Words" and "Shades of Gray."

Tork also had a music career outside of The Monkees: He released a 1994 solo record and several albums both with his band Shoe Suede Blues and with singer/songwriter James Lee Stanley.

In 2009, Tork revealed he'd been diagnosed with a rare form of cancer of the head and neck, and reported that he'd been successfully treated for the disease. This past November, Peter reported on his Facebook page that he was dealing with an unspecified health issue.

Tork is the second Monkees member to pass away, following Jones, who died of a heart attack in 2010 at age 66.