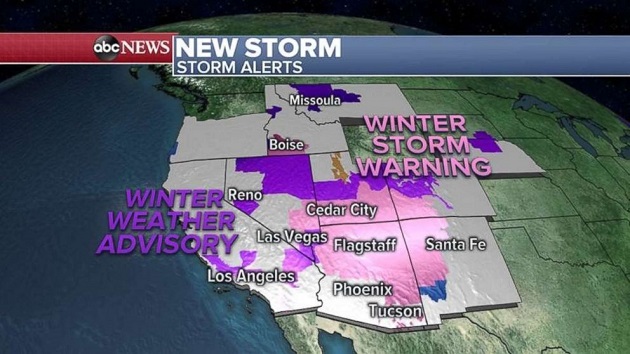 ABC News(NEW YORK) — As one storm leaves, a new one will cross the country through the weekend.
The departing storm, which wreaked havoc on the Mid-Atlantic and Northeast on Wednesday, brought up to 6 to 11 inches of snow for the Plains into the Great Lakes. Just a few inches fell from Washington, D.C., north to Boston, but it snarled travel throughout the day.

This latest snowstorm pushed many cities in the Upper Midwest into the snowiest February on record, from Minnesota to Wisconsin. In the South, more than 4 inches of rain produced flash flooding from Arkansans to Tennessee and down to Alabama and Georgia.
As the new storm gathers strength in the Southwest, 11 states are under snow and wind alerts.
The storm already brought some rare snow to Las Vegas overnight. Snow also fell in the mountains outside of Los Angeles and San Diego, slowing down traffic.
By Friday, the storm will move east, joining with moisture in the Gulf of Mexico and spreading snow and heavy rain from the Gulf Coast into the Upper Midwest once again.
The western storm becomes a powerful low pressure in the Plains by Saturday with possible severe weather for the mid-Mississippi Valley, Ohio Valley and Tennessee Valley. Tornadoes, hail and damaging winds are all possible. Very heavy rain is also likely in the South with flooding possible again in Tennessee, Kentucky, Louisiana, Mississippi, Alabama and Georgia.
To the north, heavy snow will fall once again from Kansas to Iowa and into Wisconsin.
By Sunday, the storm system moves into the Northeast and the entire East Coast, with heavy rain from Atlanta to New York City and Boston. Some snow and ice is possible in New England.
One to two feet of snow is possible in the Arizona and Colorado mountains, with up to a foot in the Midwest and the Great Lakes. Heavy rain will fall in the South, on top of all the rain that fell this week, making flooding likely. There could be 4 to 5 inches of rain from Louisiana to Kentucky.
Copyright © 2019, ABC Radio. All rights reserved.