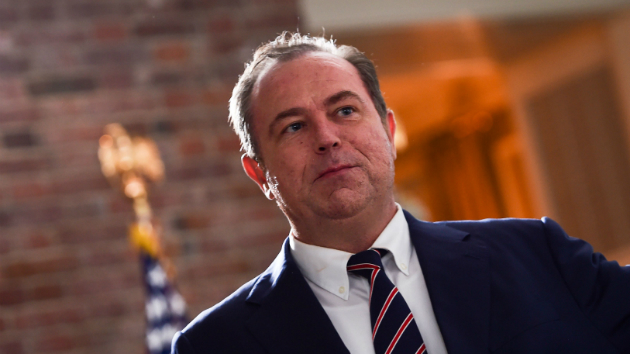 BRENDAN SMIALOWSKI/AFP/Getty Images(WASHINGTON) — Director of National Intelligence Dan Coats' job security is on the line, according to one confidant of President Donald Trump.
Christopher Ruddy, the CEO of Newsmax Media and a Trump insider, told the ABC News "Powerhouse Politics" podcast that Coats might be dismissed since the president was disappointed with him.
"I don't have a crystal ball," Ruddy told Chief White House Correspondent Jonathan Karl and Deputy Political Director MaryAlice Parks. "But I do think there's a view that maybe he's overstayed his welcome there in that job."
Ruddy told the podcast hosts that firing Coats likely would create backlash from Republicans on Capitol Hill. Coats served as a U.S. senator from Indiana for 16 years and is largely respected in the political sphere. Still, Ruddy said, Coats may not be the best fit for his current position.
"Dan Coats is good, but I would say he's not an expert," Ruddy said. "He's not a guy that comes out of the intelligence field. He was involved in oversight. There's a big difference."
He also pointed out that "openly criticizing" the president or "suggesting what he's doing is wrong" publicly is not the way to build morale.
Coats and other high-ranking intelligence officials have refuted claims the president has made. For example, after Trump publicly expressed confidence in his ability to make a denuclearization deal with the leader of North Korea, Kim Jong Un, Coats testified before Congress that North Korea "is unlikely to completely give up its nuclear weapons and production capabilities." He added that the country's activities were inconsistent with full denuclearization.
On Jan. 30, a day later, Trump fired off two tweets, calling members of the intelligence community "extremely passive and naive." He added that "Perhaps Intelligence should go back to school!"
Less than 24 hours later, Trump changed course and said the media was fabricating a conflict, and that Coats and the other intelligence officials who testified, had been misquoted.
When asked about replacing Coats on Wednesday, Trump told reporters in the Oval Office, "I haven't even thought about it.”
On the podcast, Ruddy also weighed in on the growing field of candidates looking to take on Trump in 2020.
Ruddy said Trump wasn't worried and described the high number of candidates as "becoming a circus."
"I don't think he thinks there's anyone serious that is going to really defeat him," Ruddy said. "I think he's very confident in his re-election."
Copyright © 2019, ABC Radio. All rights reserved.