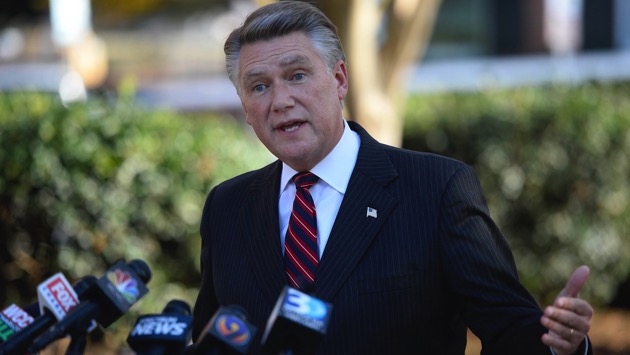 David T. Foster III/Charlotte Observer/TNS via Getty Images(RALEIGH, N.C.) — The day after his own son said he raised concerns about a "shady political operative," seeking to join his campaign, North Carolina Republican congressional candidate Mark Harris testified Thursday in an election fraud case that could end up triggering a brand new election.
"Sitting here four days into this meeting … my son was a bit prophetic in his statement that day," Harris said of his son John's warning about McCrae Dowless, the political hand that is accused of running an illegal absentee ballot collecting scheme in the state's 9th Congressional District.
That warning was revealed in testimony on Wednesday and came in a phone conversation and later an e-mail in April 2017, after John Harris said he discovered abnormalities in absentee vote totals in one rural Bladen County, North Carolina.
Despite the warnings, Mark Harris eventually hired Dowless to do absentee ballot and other campaign work.
Harris won the 2018 election in the district by 905 votes, but after concerns were raised by the North Carolina State Board of Elections about potential election fraud, the result was not certified, leaving the seat vacant and hundreds of thousands of North Carolinians without representation in the U.S. House.
John Harris' surprise testimony on Wednesday sent another shock wave into an already confusing situation, as the board continues to weigh whether or not to order an entirely new election or certify Harris' victory and seat him in Congress.
"I expressed my concerns based on everything that I did know up to that point," John Harris said Wednesday evening. "Namely my belief that McCrae had engaged in collecting ballots in 2016. Now that belief was based on my review of the absentee voter data…and also just the sense of general reports that I was getting back that this guy was kind of a shady character."
In his closing statement, with his father looking on and fighting back tears, John Harris said that his parents "made mistakes," throughout the process.
"I love my dad and I love my mom. I certainly have no vendetta against them, no family scores to settle," John Harris told the hearing room Wednesday evening. "I think that they made mistakes in this process and they certainly did things differently than I would have done them."
On Thursday, the fourth day of the board's hearing, Mark Harris took to the witness stand to say that while he respected and heard his son's opinion, he trusted Dowless and wanted him on his campaign in large part due to his relationships in the community.
Harris said that despite the warnings from his son, he trusted Dowless when he told him he was not engaged in any illegal handling of ballots.
"My son at the time that we were communicating here, was still my son. He was 27 years old, very sharp young man who I have a great deal of respect for him … as an attorney. But he was looking simply at data that he was doing of a special election," Harris said, "He had never been to Bladen County, he had never met McCrae Dowless, he had never met any of these elected leaders. … So no, I didn't go back any further. … I did have a comfort level at that point."
Harris met Dowless at an April 2017 meeting arranged by a mutual friend, Judge Marion Warren.
"He seemed to have the relationships that I was gathering from the conversation that happened in that meeting that day," Harris said. "Absentee ballot request forms and getting people to fill that out and turn that in and even get an absentee ballot, does take a certain amount of trust for individuals to do it, and those relationships I felt like is what caused him to be successful."
Harris' testimony also comes after his attorneys were scolded Thursday for not producing, in a timely enough manner, a text message between himself and Warren asking her to connect him with a man that ran an absentee ballot program that "could have put me in the US House this term, had I known, and he had been helping us."
That man would turn out to be Dowless.
"The timing of your disclosure raises significant and material concerns regarding the Committee's compliance and candor prior to, and now during, the hearing," Josh Lawson, the general counsel for the board of elections, wrote to Harris' attorney John Branch on Wednesday evening.
Looming over Harris' testimony on Thursday is the possibility of a new election, which the North Carolina Board of Elections has the power to call if it deems that there was enough fraud in the election that it could have tainted the races ultimate outcome.
Democrat Dan McCready has not commented publicly on the proceedings but is being represented at the hearing by his attorney Mark Elias.
Elias called the failure to disclose the text message in question "gamesmanship," and characterized the exchange as "explosive."
Copyright © 2019, ABC Radio. All rights reserved.