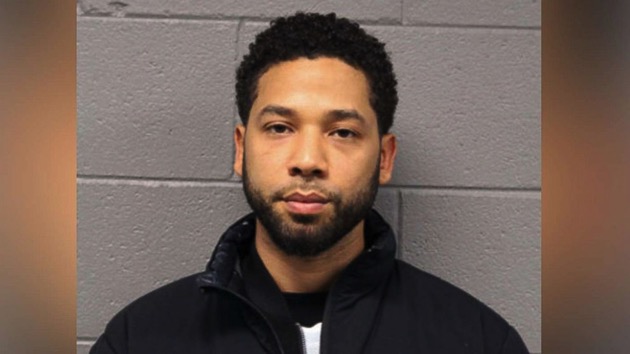 Chicago Police Dept.(CHICAGO) — Chicago Police Superintendent Eddie T. Johnson blasted Jussie Smollett in an emotional press conference on Thursday in which he said that Smollett's alleged staging of a hoax attack was a "publicity stunt…to promote his career."
"Jussie Smollett took advantage of the pain and anger of racism to promote his career," Johnson said. “I am left hanging my head asking ‘why?’. Why would anyone, especially an African-American man, use the symbolism of a noose to make false accusations? … How can an individual who's been embraced by the city of Chicago turn around and slap everyone in the city in the face with these false claims?"
Johnson charged that Smollett, an actor on the hit show Empire who has consistently denied any role in staging the alleged attack, orchestrated it because he was "dissatisfied with his salary."
In addition to staging the attack, officials said, Smollett also sent himself a hate-filled letter to the Fox studio where the hit show is filmed.
Smollett turned himself in at 5:15 a.m. local time and made a statement to police before being taken into custody. His lawyers, Todd Pugh and Victor Henderson, were not present at the time but they released a statement the night before.
"Like any other citizen, Mr. Smollett enjoys the presumption of innocence, particularly when there has been an investigation like this one where information, both true and false, has been repeatedly leaked. Given these circumstances, we intend to conduct a thorough investigation and to mount an aggressive defense."
Police add that Smollett gave no statement to police after turning himself in and that his lawyers had reached out to them Wednesday night to discuss his surrender.
By late morning on Thursday, the backlash against the actor began at the top, with an angry tweet from the President of the United States.
"[email protected] – what about MAGA and the tens of millions of people you insulted with your racist and dangerous comments!? #MAGA" President Donald Trump wrote in a tweet after the press conference.
During a press briefing later Thursday morning, Chicago law enforcement officials said that Chicago police detectives interviewed more than 100 people and reviewed dozens of police cameras trying to get to the bottom of Smollett's claims.
Johnson, a well-regarded and popular big city police chief and Chicago native, appeared genuinely aggrieved as he described how, he said, Smollett took advantage of the pain of racism to advance his career.
"Why would anyone use the symbol of a noose" to further his "own public profile," Johnson wondered aloud.
"I'm offended by what happened and I'm angry," Johnson continued. "This publicity stunt was a scar that Chicago didn’t own and certainly didn’t deserve."
Johnson, who oversees one of the nation's largest police departments in one of its most violent cities, seemed disheartened by all the attention paid to the Smollett affair.
“The accusation within this phony attack received national attention for weeks,” Johnson told reporters during a press conference. “Celebrities, news commentators and even presidential candidates weighed in on something that was choreographed by an actor."
"When you get the opportunity," he said with a mixture of derision and frustration, "the shooting victims and their families? Give them the same amount of attention."
After the press briefing, 20th Century Fox, the station that airs Empire, released a statement which read, "We understand the seriousness of this matter and we respect the legal process. We are evaluating the situation and we are considering our options."
Smollett told police he was attacked by two masked men near his apartment in Chicago. The two men, Smollett initially said, shouted racist and homophobic slurs at him as a rope was wrapped around his neck and a chemical compound was poured on him. The alleged assailants yelled "MAGA country," a reference to President Donald Trump's "Make American Great Again" slogan, police were told.
In an interview with Good Morning America anchor Robin Roberts, Smollett said he was heartbroken when he found out that people questioned his story.
Police identified and questioned two "persons of interest" captured on surveillance video near the scene around the time of the alleged attack. The men, who are brothers, were arrested on Feb. 13 but then released without charges, with police saying they were no longer considered suspects.
While being questioned by investigators, the brothers claimed that Smollett paid them to help orchestrate and stage the crime after he became upset that a letter threatening him, sent Jan. 22 to the Fox studio where Empire is filmed, did not get enough attention, sources told ABC News.
Johnson said that Smollett's seeming injuries from the incident were also phony.
“The brothers had on gloves during the staged attack where they — they punched him a little bit, but as far as we can tell, the scratches and bruising that you saw on his face was most likely self-inflicted," he said.
On Wednesday, Smollett was charged with felony disorderly conduct for filing a false crime report. By that evening, police officially had classified the actor as a suspect in the ongoing investigation. Detectives subsequently presented evidence to a Cook County grand jury.
"That was a pretty hateful allegation, and it really put a terrible look on Chicago," Guglielmi told ABC Chicago station WLS in a telephone interview Thursday morning. "Chicago trusted this young man. We loved Empire, and we took this very seriously that something this hateful could happen in our city."