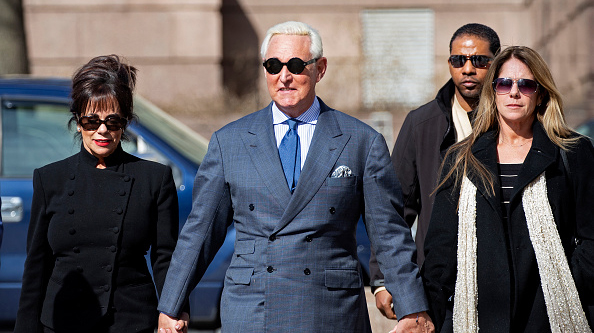 Alex Wroblewski/Getty Images(WASHINGTON) — A federal judge on Thursday slapped a full gag order on Roger Stone, just days after the longtime political operative and adviser to President Donald Trump posted an inflammatory image on Instagram that appeared to target her.
Judge Amy Berman Jackson said the posting had a "sinister message" and ordered Stone from speaking publicly about his case.
The image Stone posted to Stone's 45,000 Instagram followers featured a photograph of Jackson with what appeared to be crosshairs in the upper left corner. A caption characterized Jackson as “an Obama appointed Judge who dismissed the Benghazi charges again Hillary Clinton and incarcerated Paul Manafort prior to his conviction for any crime."
At Thursday’s hearing, Stone, who has apologized both publicly and in court documents, sought to take responsibility for the content of the post but maintained he did not select the image.
"I am kicking myself over my own stupidity, though not more than my wife was kicking me. I offer no excuse for it, no justification,” Stone told the judge. "This is just a stupid lack of judgment."
Before issuing her order, Jackson laid into Stone for both his conduct and his apology, which she said “rings quite hollow.”
"So no Mr. Stone, I am not giving you another a chance. I have serious doubts about whether you have learned any lesson at all," the judge said. “From this moment on the defendant may not speak publicly about the case."
“The post had a more sinister message,” she said. "Roger Stone fully understands the power of words and the power of symbols, and there's nothing confusing about crosshairs.”
Earlier, Jackson grilled Stone about his decision to post the image, questioning why he could not have selected an image without crosshairs.
"It is your Instagram. So, it's fair to say you are 100 percent responsible for what gets posted on it and not anybody else,” she said. "Do you know how to do a Google search? And do the volunteers who work for you know how to do a Google search? How hard was it for you to select a photo that did not have a crosshairs in the corner?"
Stone fielded questions under oath from both prosecutors and the judge for more than 30 minutes, struggling to explain the logistics of who selected the image that appeared on his Instagram page. He insisted that what the judge and prosecutors perceived as crosshairs was actually a “Celtic symbol.”
Special counsel prosecutor Jonathan Kravis then encouraged the judge to issue a gag order on Stone and suggested his testimony Thursday was “not credible.”
Last week, Jackson issued a “narrowly-tailored” gag order on prosecutors and witnesses involved in Stone's case but left Stone to continue speaking publicly about the probe – as long as he refrained from doing so near the federal courthouse in Washington, D.C.
"Every time the defendant gave another one of those interviews he continued to amplify the media coverage and increase the risk to the jury pool," Kravis said.
Stone’s defense team counsel, Bruce Rogow, sought a second chance for his client.
"What [Stone] is really asking for is a second chance. It should not have been done. It is indefensible," Rogow said.
Special counsel Robert Mueller indicted Stone in January on five counts of lying to Congress, as well as witness tampering, and obstruction of justice as part of Mueller's probe into possible collusion between the Trump campaign and Russian meddlers in the 2016 U.S. presidential campaign.
Stone has pleaded not guilty to all seven counts.