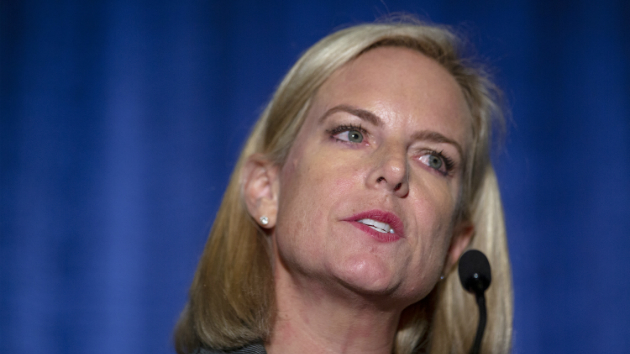 Tasos Katopodis/Getty Images(WASHINGTON) — Homeland Security Secretary Kirstjen Nielsen traveled to Central America this week where her message wasn't all that different from several Democrats'.
Their answer? More should be done to protect Central American families in the first place, so fewer seek refuge in the United States.
The comments in recent days by Nielsen and Democratic lawmakers suggests there's rare common ground on what's mostly been an explosive and divisive political issue. It's also in contrast to President Donald Trump's past reluctance to support foreign aid efforts and his insistence that only a border wall will do.
Speaking at a conference in San Salvador, El Salvador, Nielsen on Wednesday said she's reached an agreement with the leaders of El Salvador, Guatemala and Honduras to address the "root causes" of migration. That would include better "information sharing, public messaging and security cooperation in order to ensure migrants receive protection closer to home rather than making the dangerous journey north," her office said in a statement.
The majority of migrants arriving at the border come from Guatemala, followed by Honduras and El Salvador.
Sens. Tom Carper of Delaware and Jeff Merkley of Oregon, who led a group of Democrats to visit the region in recent days, also said more could be done to collaborate with those countries to improve security for residents so they don't want to leave.
Carper said he was open to the administration's plan to make it easier for people to file a claim for amnesty or asylum from their home country, instead of at the border. He noted that he has shared notes with the administration, which, he said, seemed open to exchanging lessons learned.
"There's been a pretty good collaboration, and I'm encouraged by that," Carper told reporters in a call on Wednesday.

Overall, the number of people caught trying to cross the border illegally in recent years has plummeted — from about 1.6 million in 2001 to less than 400,000 last year.
But apprehensions have crept higher in recent months. Since October, U.S. officials have apprehended more than 200,000 people trying to cross the U.S.-Mexico border illegally, an 85 percent increase from this time last year, according to data provided by the U.S. Customs and Border Protection.
The types of people arriving at the border have changed too. Instead of young men from Mexico looking for work, most common during the George W. Bush administration, CBP said large groups of 200 to 300 people traveling together from Central America — mostly families with young children — are arriving at the same time to claim asylum. Often, the groups are coordinating via social media and only take a few days to reach the border by bus, officials said.
On Wednesday, Nielsen, who supports building a border wall, approached the issue diplomatically, meeting privately with Guatemalan Minister of Government Enrique Degenhart, Honduran Security Minister Julian Pacheco and Salvadoran Minister of Justice and Public Security Mauricio Landaverde.
"I thank my foreign counterparts for their determination to increase cooperation with the United States on stopping the formation and movement of caravans and the networks that facilitate them," she said in a statement afterward.
Democrats like Carper and Merkley are still balking at the administration's hard-line approach on immigration, which also has called for asylum seekers to wait in Mexico while their cases wind through the courts.
But calls to address the root cause of migration through diplomacy seems to suggest at least some common ground between the two sides, even as Trump's tweets focus solely on border wall construction and favor his "America First" agenda over diplomacy.
"What's driving people is hope — hope for a better life," Merkley told reporters Wednesday. The question, he said, should be, "Are we doing enough?"
Copyright © 2019, ABC Radio. All rights reserved.