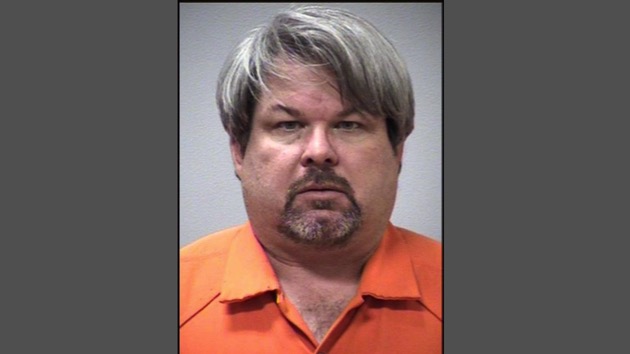 Kalamazoo County Sheriff's Department(NEW YORK) — In never-before-seen interrogation tapes, Jason Dalton, the former Uber driver who pleaded guilty to a 2016 shooting spree in the Kalamazoo, Michigan, area that left six dead and two severely wounded, explained in detail how he claimed the ride-sharing app had "guided" him to kill unsuspecting residents.
During the 2016 interrogation, tapes of which ABC News' 20/20 obtained, Dalton told investigators that he'd been working for Uber for less than a week and had noticed something unusual about the mobile app.
"The minute that I logged on, to be honest with you, I don't know what happened," he is heard telling investigators in tapes. "I know you guys are going to have a hard time believing this, but it literally took over (my) mind and body."

Watch the full story on 20/20 THIS FRIDAY, Feb. 22, at 9 p.m. on ABC.
The shootings occurred on the evening of Feb. 20, 2016, as Dalton continued to transport Uber customers to their destinations.
His victims included Tiana Carruthers, 28; Richard Smith, 53, and his 17-year-old son, Tyler Smith; Mary Lou Nye, 62; Mary Jo Nye, 60; Dorothy "Judy" Brown, 74; Barbara Hawthorne, 68; and then-14-year-old Abigail Kopf.
Carruthers and Kopf survived the shootings.
After Dalton was taken into custody, he was interrogated twice, separately by officers with the Michigan State Police and the Kalamazoo Department of Public Safety.
"He was a white male, salt-and-pepper-colored hair, wearing glasses. … He was short and heavy-set. … Besides that, nothing stood out about him," Kalamazoo Department of Public Safety detective Cory Ghiringhelli told 20/20.
Investigators spoke with him over the course of about four hours overnight and the next day. Dalton showed no emotion in the interrogation room, said detective Bill Moorian of the Kalamazoo Department of Public Safety.
"There was no fluctuation in his voice. He was just sitting there going through the motions that were going on and it was just unusual," Moorian said. "[I] never had anybody like that before."
Investigators say that during the interrogation, Dalton was initially hesitant to talk with the officers, refusing to answer their questions and pleading the fifth. He did speak to them about his beloved dog, a black German shepherd, and even asked to call his wife, though shortly after she picked up the phone and a quick exchange, he hung up, telling officers he'd only wanted to hear her voice.
Finally, however, he began to talk about the Uber app.
Dalton claimed that he'd seen the symbol of the Eastern Star when he initially logged into the Uber app, Kalamazoo detective Ghiringhelli said.
"That started this whole thing," Ghiringhelli recounted from the interrogation.
"I just tapped it and then there was like a devil head that popped up," Dalton told investigators in the tapes. "It was some sort of like horned, horned head like a cow head or something. … I pressed that button and that's where all the problems went after that."
Dalton told detectives that the Uber app had taken control of him.
"You can drive over a hundred miles an hour and go through stoplights and nothing will, you can just get places. … When I tapped that, it said that I could say whatever I wanted to. … There would be no repercussion," he said.
Dalton said the app would start off red and then switch to black.
"When it's in that black mode, it literally has control of you," he said. "It would do a little blink at me."
Ghiringhelli said that according to Dalton, the app gave him an assignment and he had to complete the assignment.
"It was like he was a puppet," Ghiringhelli told 20/20.
The phone communicated with him, Dalton told investigators, instructing him on what to do. "One ding" meant "yes" and "two dings" signaled "no."
Dalton also told investigators that when officers pulled him over around midnight, ending the shooting spree, he'd almost reached for his gun but the phone had returned to red. Dalton said that's why he did not shoot at the officers.
"I was no longer being guided. … I mean, that's not my nature to be that way," he told detectives. "The minute that the app went from black to red. … I had my presence."
"I wasn't believing any of it but if it's something that's gonna make him talk, you're not going to shut him down," Moorian said. "So, we just let him talk about it and we tried to encourage him."
Dalton also told investigators that prior to the shootings, he had not been sleeping and that was "not normal" for him.
"I've mainly just lied down a few times," he said. "I've been going for a long time. … I think I've been going for probably more than 24 hours."
He told them he had no idea how many people he'd shot and said that shootings had been totally random. He also revealed that he remembered shooting a child.
Michigan State Police detective Sgt. Kyle Gorham said Dalton's voice had changed "dramatically" when he spoke of shooting Kopf.
"He felt badly for the child and the family of the child but he didn't express any remorse for anybody else," Moorian said.
Kalamazoo County prosecutor Jeff Getting said that as far as they know, Dalton had no marital trouble, emotional trouble, criminal record or financial problems. Getting said there was also no evidence of Dalton's being an extremist.
On Jan. 7, nearly three years after the shootings, Dalton pleaded guilty to six counts of first-degree premeditated murder and two counts of assault with the intent to commit murder.
The decision was a surprise as attorneys were preparing to select a jury for his criminal trial. A judge sentenced him on Feb. 5 to life in prison without the possibility of a parole.
When reaching out to Uber for comment, a representative referred 20/20 to a 2016 call with reporters about the Kalamazoo incident, during which Uber's then-chief security officer, Joe Sullivan said, in part, “I want to reiterate how devastated we are by these murders, and that our thoughts are with the victims' families and the broader community in Kalamazoo. As the local police have made clear, the perpetrator had no criminal record, and if there's nothing on someone's record, then no background check is going to raise a flag. As this case has shown, past behavior may not accurately predict how people will behave in the future. This is where technology can help ensure safety before, during and after a ride in ways that was not possible a decade ago.”
“We're deeply committed to the safety of everyone on our platform, as well as the communities we serve, and we have a clear policy that prohibits having firearms in the vehicle,” he added.
Copyright © 2019, ABC Radio. All rights reserved.