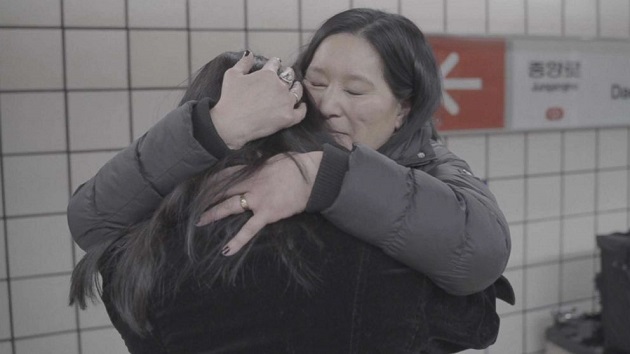 MyHeritage DNA(SEOUL, South Korea) — After nearly five decades of living without knowing each other, two South Korean-born sisters embraced each other at a subway station in Daegu, a city 180 miles outside of Seoul, thanks to a DNA test.
"The chances of finding each other really are one in a billion without taking a DNA test," Rafi Mendelsohn at MyHeritage told ABC News. "Taking the MyHeritage DNA test has enabled Kim and Christine to finally discover their biological family for the first time in their lives."
Christine Pennell was 2 years old when she was left at the Banyawol subway station in Daegu, the sisters told ABC News. A few weeks later, Kim Haelen — then only 6 weeks old — was abandoned at Daegu Station, a different stop.
They were brought under the care of two different orphanages in Daegu, and no one knew the infants were related, they said.
Christine, the elder sister, was adopted and grew up in the United States as a happy child in a loving family where she had five brothers and sisters, she told ABC News. But still, she always wondered about her biological family.
"I kind of tried starting [to find them] when I was about 24 or 25," she said. "And then I was told there's no information, so it wasn't possible for me to go anywhere with it."
Kim, the younger sister, grew up as a big sister in a home in Belgium with two younger sisters and two older brothers, she said. She never imagined she would meet a blood-related older sister.
But after some health problems, she started wondering about her genealogy. So, in December, she did a DNA test with MyHeritage — just hoping to find some information, not necessarily any family members, she told ABC News.
On Jan. 25, the results came in through an email, telling her she had what appeared to be a full biological sister.
"That can’t be, that can’t be," Kim said she told her husband in shock.

She couldn't stop looking at the results, which indicated she could email the match through the company, and she decided to reach out.
"I never have luck in lottery and games. Now, they found out that I have a sister — this is a jackpot," Kim told ABC News.
On the other side of the planet, Christine, who did a test with MyHeritage DNA after being inspired by the movie Lion to find out about her biological family, was about to go out for dinner when she received an email from Kim saying, "I think we're related."
"I’m shaking and I’m crying, and I haven't even opened up the email yet," Christine recalled to ABC News. "It was such a gift … I never thought that would ever happen for me."
That night, they had their first video chat — and they've been in touch ever since catching up on their lost sisterhood through hours of phone conversation and emails.
"That was the first time I ever saw somebody that somewhat looked like me. Because you always wonder as an adoptee, whose eyes do I have? Whose hands?" Christine said. "Now, I have my sister, and we're so much alike."
They decided to reunite where they were separated. So on Feb. 15, Christine flew to South Korea from Connecticut and Kim from Belgium to make up for the time they missed over the last 47 years.
Kim pulled into the Daegu subway station where she was abandoned all those years ago and saw her sister waiting for her train.
"And we're now together," Kim told ABC News. "It's wonderful."
In South Korea, Christine and Kim did what all sisters would do growing up together: They picked out dresses for each other at the mall and tried traditional Korean cuisine. They realized they had more things in common than just the looks.
"We both don’t like fish. We both like to sing and dance. We both like to smile and laugh a lot and are very silly. We pretty much have a good amount of energy," Christine said, adding that they're both mothers to grown children themselves.
Now that they've found each other, Christine and Kim are hoping to find their birth parents. During their week-long visit to South Korea, they made flyers and distributed them across community centers and police stations in Daegu, hoping someone would recognize the sisters from their pictures.
"The fact that we’re full-blood sisters means our parents were together long enough for us both to be born. And there’s a good chance that they're still together and we may have more siblings," Christine said.
"I want to know who they are," Kim said, "and I want to search with Christine."
Copyright © 2019, ABC Radio. All rights reserved.

Wreckage of TWA Flight 800 to be destroyed 25 years after crash
Family farm brings calves into the kitchen with South hit by record cold
Major winter blast coming to an end as milder temperatures move into South
Hard freeze warnings persist in the South but warmth on horizon: Latest forecast
Elizabeth Olsen acknowledges her famous sisters may have influenced her career: “Nepotism is a thing”
Icy blast stretching from Dallas to New York but warmth is on horizon for the South